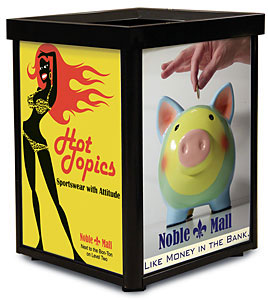 Evanston aldermen this week gingerly started to explore the possibility of putting advertising on city facilities downtown and along the lakefront.

The City Council Monday approved an advertising policy statement setting out some ground rules for what types of advertising it might be willing to accept.

But the aldermen asked City Manager Wally Bobkiewicz to provide more detail before they would sign off on a request for proposals that would seek firms to manage advertising placements for the city.

The plan envisions that ads might be placed on recycling and trash receptacles and information kiosks as well as on the city's downtown parking garages.

On the lakefront advertising might be placed on beach houses, lifeguard stands and lakefront trail marker signs.

Wynne said peoples lives are already "so cluttered with unwanted messages and advertising. You can't even buy groceries at the supermarket without being assaulted with advertising."

But Alderman Lionel Jean-Baptiste said he didn't think the proposed advertising would necessarily be all that intrusive.

Bobkiewicz said he understands that there's a crticial quality of life issue around advertising, but that the city also faces multi-million dollar budget shortfalls.

He conceded that he's not sure there's even a market for such ads, but said he wants to at least find out whether there is one.

"If we can't come up with something acceptable, then we won't proceed with it," he added.

Alderman Jane Grover, 7th Ward, said it may turn out that "nobody wants to play with us."

"But I think we have to ask the question," Grover said.

The aldermen last fall approved an agreement with a Florida firm, Creative Outdoor Advertising, to place bus shelters around town that would be paid for with advertising displayed on the shelters.

Image above: An example of a trash can with advertising panels available from one vendor.