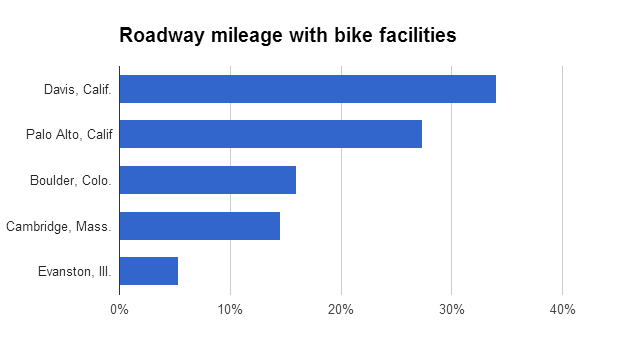 Aldermen tonight will be asked to approve a plan that maps out a major expansion of bike lanes that potentially could move Evanston to the forefront of bike-friendly communities nationwide.

A study by the League of American Bicyclists ranks Evanston in the third, or "silver" tier among bike-friendly communities.

The city's new bike plan, comparing Evanston with college towns of similar size that received higher rankings in the 2012 edition of the bike-friendly study, shows Evanston sharply lagging those towns in the percentage of its roads equipped with bike lanes or similar bike "facilities" that separate cyclists from motor vehicle traffic — even with the addition of 1.7 miles of protected bike lanes on Church and Davis streets in the past two yars.

Now, the city says, just 7.4 of Evanston's 140 miles of streets have such bike facilities.

But the city is already in the midst of designing  nearly three miles of additional bike lanes, plus upgrades to some existing ones. 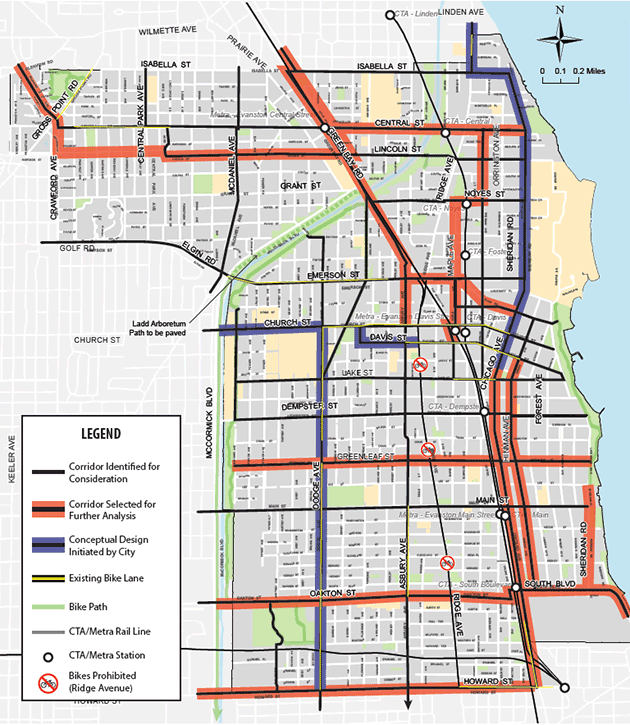 Those include include stretches of Church and Davis streets. Dodge and Chicago avenues and Sheridan Road.

The new plan calls for further analysis of as much as 16 more miles of additional "comfortable bike corridors" along eight routes that include stretches of Howard, Oakton, Greenleaf, Emerson, Lincoln, Harrison and Central streets, Hinman, Chicago, Maple, Orrington and Crawford avenues as well as Sheridan and Green Bay roads and South Boulevard.

The plan estimates the cost of creating those comfortable corridors at nearly $4 million and anticipates getting much of the funding for the projects from a variety of state and federal grant programs.

A copy of the new bike plan is available in the packet for tonight's City Council meeting.