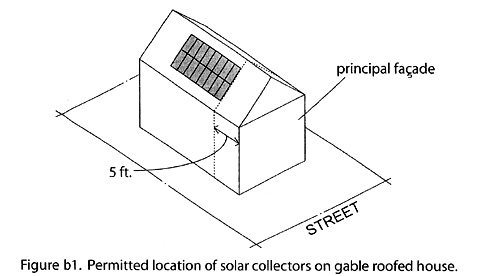 The rules would limit the placement of the energy-saving devices on homes and other buildings and in yards.

In an effort to hide the panels from the view of passersby on the street, the ordinance requires that panels be placed at least five feet back from the front facade of a building.

The impact and effectiveness of that rule will be vary substantially depending on the design and positioning of a house on its lot.

Assuming a house with a modest 24 by 40 foundation size, if the house has a gable-style roof in which the gable faces the street, the only limit would be that the solar collector must be set back five feet from the front facade.

That would leave a 12 by 35 foot area — 420 square feet — available on the sunnier side of the house for solar collectors, and the setback might actually shield the collectors from the view of passersby. The ordinance would also permit collectors on this house to be raised off the roof to improve the angle at which the sun strikes them. 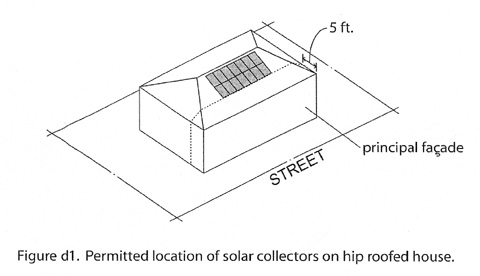 Assuming the same foundation size, this house would have only a 7 by 16 foot area — 112 square feet — available for solar collectors on the front face of the house.

For flat-roof buildings, the ordinance requires that solar collectors be set back five feet from the front facade, or less if they would not be visible from the street.

Committee Chair David Doetsch said solar collectors should be encouraged for their environmental benefits — they reduce energy consumption and decrease demand on public facilities and services. As long as they fit contextually on the roofs where they’re built, he said, they will not have an adverse effect on adjacent properties.

The zoning code’s current rules on solar collectors are much less detailed, but limit them to a height of 10 feet and a length of 20 percent of the building surface to which they are attached.