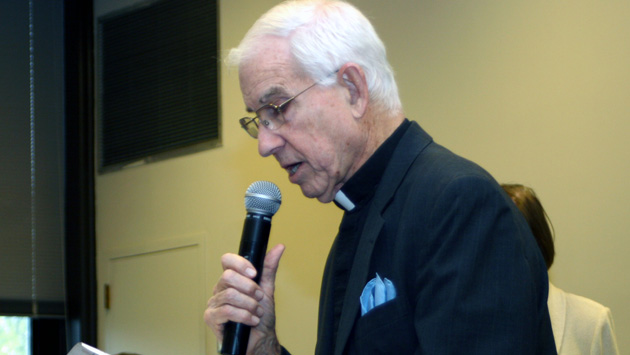 Here's  a recap of our live coverage of tonight's Evanston City Council meeting.

This is the first meeting of the new City Council elected last month. So the format will be different than for the usual meeting. The meeting will start with the City Council members taking the oath of office and then there'll be a break for a reception.

After that the committee meetings that usually precede the City Council meeting will be held, starting at 7 p.m., and then the full City Council will reconvene for its usual business.

Since all the incumbents were re-elected last month, the new council will look exactly like the previous one.

Judge Lionel Jean-Baptiste administers the oath of office to the mayor, city clerk and townshp supervisor. 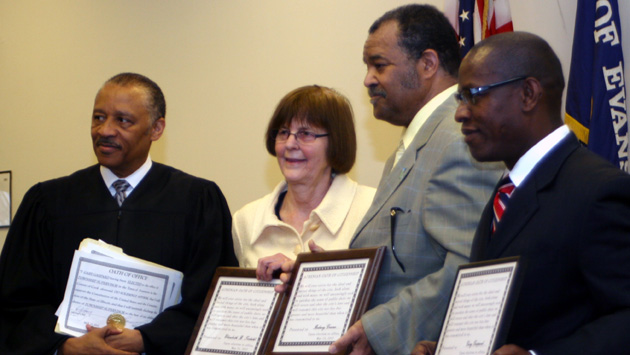 Judge Jean-Baptiste with Mayor Tisdahl, Clerk Greene and Supervisor Gaspard pose with the Athenian Oath of Citizenship statements they signed.

Mayor Tisdahl administers oaths of office to each of the aldermen. 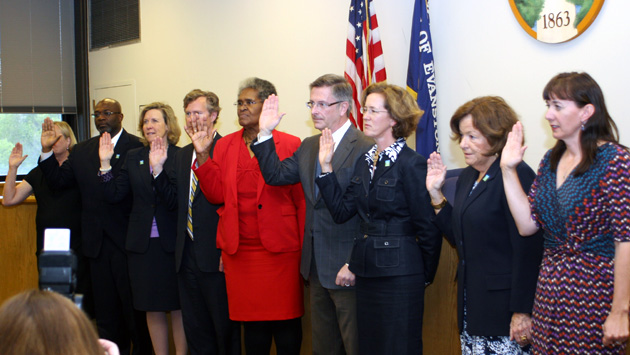 And with that, the meeting was recessed for a reception at 6:35 p.m.

Vacation rentals … being sent back to committee for further amendments … exceptions … sale-leaseback of homes … and make sure changes are consistent …. and possible exceptions for hardship cases.

Commercial indoor recreation … Wilson says "commercial" shouldn't preclude other uses that might not be strictly "commercial." — especially if they're rental situations in which property taxes would still be paid.

Alderman Delores Holmes, 5th Ward, says concerned about how property owned by private owner can be be tax exempt because it's used by a property-tax exempt non-profit user.

Rainey says she hopes the answer to that is no.

Bobkiewicz says may be able to address the issue through the special use process.

Rainey says she's not comfortable voting for the ordinance without having the answers to the tax questions. Wants to vote for it, but not ready.

Wilson says if leave "commercial" in the ordinance should avoid those problems.

Holmes and Tendam also want to hold — till next Monday's meeting.

So the indoor recreation item is held

Mayor Tisdahl says she has problems with idea that it's progressive to have moratoriums on new technology. Should have laws that outlaw bad uses of the technology instead.

Fiske says she had interesting conversation with an NU professor working on unmanned airial vehicles — wanted to know whether police would be showing up to arrest him and students who might be testing them in public parks. Also references use of drones to map migratory patterns of birds (story in NYTimes). Says at least until reach out to faculty at NU think not a good idea to move ahead with the ordinance unless its very specifically written to focus on warfare and privacy.

Grover says there are beneficial uses to drone technology, but most existing regulation comes from FAA — not sure want used in park… syas different from kite because most have cameras attached to them.

Says it's not not a restriction on research. Says can easily revisit moratorium if legislature adopts meaningful regulation.

Wilson says generally supports the moratorium. Says certainly not meant to apply to a remote control airplane or other model technology …. don't want it to apply to children's playthings

Wynne says those toys do have cameras. Wilson says he doesn't have any of those toys.

Braithwaite says was clear what the chief was talking about — he doesn't have any immediate plans to use. Can compare to red light technology. We're just saying we're going to wait. Says not talking about toys, but large surveillance equipment that can be used to invade the privacy of residents.

Fiske says it's not just childrens toys– says her dentist flies model airplanes that are fairly sophisticated in the parks.

City Attorney Grant Farrar says would want to look at floor debates on Biss's bill … to further flesh out the definition and use issue. Says don't have level of comfort to come up with a definition tonight.

Bobkiewicz says saw drones being sold at Brookstone at O'Hare airport. Will have police officers and code enforcement officers getting phone calls — just need to know what the parameters .

Bobkiewicz says could bring the issue back on May 28 with at least an update on their work.

Rainey suggests also checking with Northwestern and find out how moratorium would affect their research development.

Council votes to hold the issue until May 28.

Fiske … wants to have staff research whether B&Bs and vacation rentals should pay hotel tax.