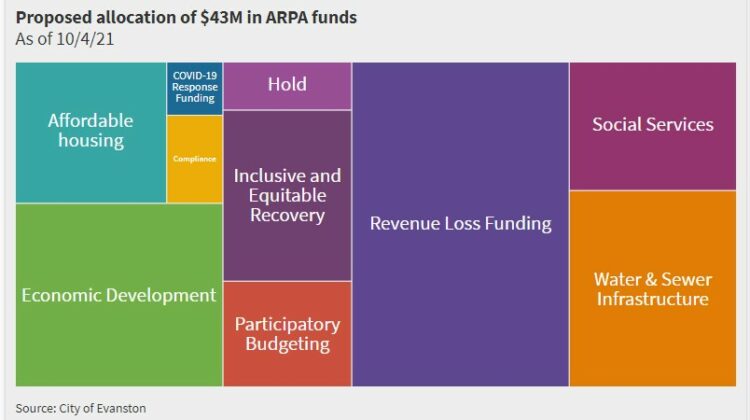 Evanston alderpersons will make another attempt to agree on how to spend $43 million in federal American Rescue Plan Act funds at a special City Council meeting Monday night.

A new set of recommendations from city staff (above) showing projects and categories sized by funding amount offers somewhat more detail on the allocations and a revised set of category groupings than included in recommendations (below) offered last month.

The new proposal, prepared after a City Council discussion last month, increases the share of funds allocated to specific project to 56% from 39% in the September staff proposal and 19% in a preliminary proposal presented in July.

Major changes in the latest proposal include subdividing what had been the “Affordable housing, City finances, Sustainability & Infrastructure” category into several new categories — COVID-19 Response Funding, Compliance, Affordable Housing, Water and Sewer Infrastructure and Revenue Loss Funding. It also increases the total pot of funds for those categories from $22 million to $23.9 million.

Affordable Housing for the first time gets a specific funding amount of $4 million. Water and Sewer projects increase from $3 million to $6 million. General Fund Lost Revenue Replacement for 2022 is trimmed from $2.5 million to $1.5 million.

Spending for Climate Action and Resilience Plan implementation, which had been budgeted at $1 million, is folded into three other buckets — for Affordable Housing, Water and Sewer Infrastructure and Equitable Recovery.

Funding for Economic Development increases from $5.5 million to $7 million, while funding for Inclusive and Equitable Recovery is trimmed from $6 million to $4 million.

In addition, a reserve for money on Hold — not to be allocated until the second year of the ARPA program — is trimmed from $4.2 million to $1.2 million.

So far the Council has only adopted resolutions to implement three ARPA funding proposals — $3 million to the water fund for replacing lead service lines, $950,000 for parking fund projects and $700,000 for a guaranteed income pilot project.

A packet with details of the latest proposals is available online. Monday’s special City Council meeting is scheduled to start at 7:30 p.m. Find earlier stories on ARPA funding allocations here.