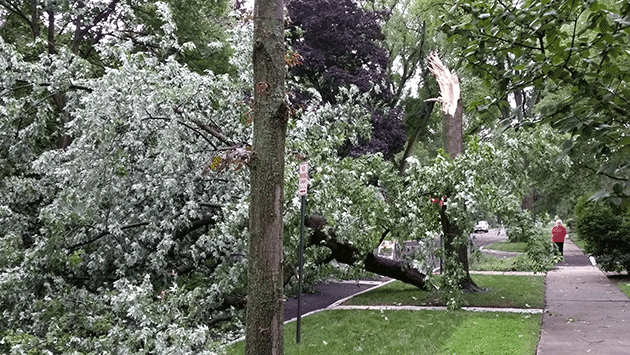 "We also have two locations where trees have begun to uproot and are leaning, but have not yet fallen. These two trees are being addressed today," D'Agostino says.

Three forestry crews were out until 9 p.m. Friday clearing the main streets to at least make them passable.

"We have three crews out again today to address the most serious problems, and to try and get all streets passable, D'Agostino says. "We will also try to address the hanging limbs where we can, but I suspect there are many more of these that have not yet been reported by residents."

He said crews will conduct a street-by-street inspection starting Monday to address all the hanging limbs that could cause damage or injury.

I have not yet decided on whether I will have crews out on Sunday. We will decide this based on what they can accomplish today, and whether there are still locations that pose a danger or not.

I suspect it will take most of next week to thoroughly clean up everything that was damaged during the storm and remove all the hanging limbs."

Utilities Director Dave Stoneback reports there are still approximately 750 accounts in Evanston without power.  The majority of them (645) are along Asbury between Oakton south to the CTA tracks.  There are other small areas with 45 or so out.