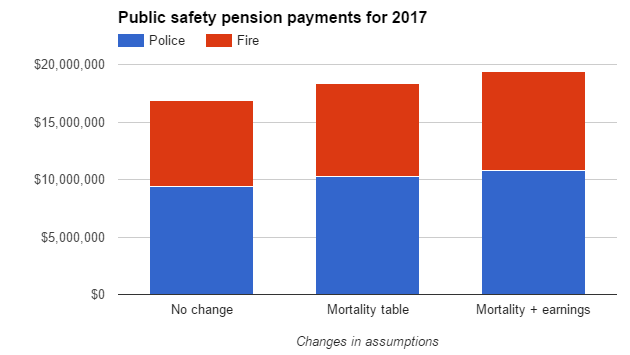 The shift in assumptions about how long pension recipients will live adds $1.5 million to the amount of money city taxpayers will have to come up with to fund the pensions next year — bringing it to a total of nearly $18.4 million.

Also reducing the assumption about how much the pension funds will earn on their investments — from a 6.5 percent rate of return to 6.25 percent — would require adding almost $1 million more to the pension contributions next year.

The actual rate of return averaged just over 4.5 percent for the two funds last year.

City and pension fund officials, in a memo to aldermen, said that consultants to both funds believe that long term interest rates will be at or below the 6 percent range for funds — like the public safety funds — that must have a mix of fixed income and equity investments under state law.

But they said that given the uncertain state budget situation, making both changes now could create a severe budget crunch for the city if the state decides to cut aid to municipalities.

So they recommended deferring for a year a reduction of the interest rate assumption to 6.25 percent.

Deron Daugherty, president of the fire pension board, said pension underfunding is a 30- to 35-year-old problem, and it will take the same amount of time to work out of it.

He said other communities are making unrealistic assumptions to show funding levels that are higher than those in Evanston.

But, during public comment, Jim Young, a member of the now-disbanded mayhor's pension committee, said the pension funding situation continues to get worse and that the 6.5 percent assumed rate of return is probably at least a percentage point too high.