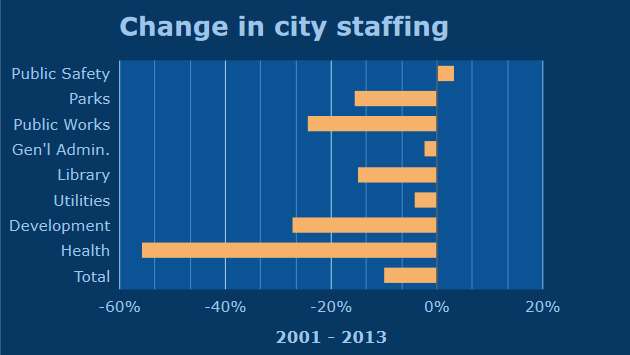 The number of Evanston city workers has shrunk by 10 percent over the past dozen years, but the reductions have been unevenly distributed across different city functions. 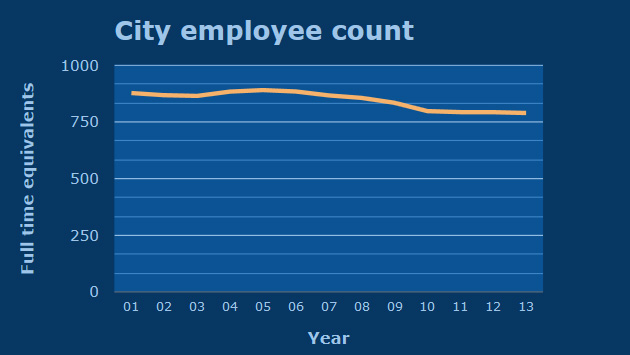 Despite the staffing reductions, overall city spending has continued to increase, though at a somewhat reduced pace. And the city's property tax levy has continued to rise at roughly twice the rate of inflation.

Because of changes in the organizational structure of city government, it can be difficult to compare staffing levels from year to year, but the chart that leads this story tries to adjust for that by assigning employees from a dozen years ago to the functional groups that they would be part of if they worked for the city today.

And note that, throughout this story, counts of employees refer to "full-time-equivalent" workers, not the total number of full and part-time employees.

During the past dozen years five units have suffered cuts deeper than the 10 percent city-wide average.

The city was one of very few in the state with a municipal health department that was still providing clinical services to patients.

In recent years the aldermen took a gamble that those clinical programs — paid for with local tax dollars — could eventually be replaced with ones run by an external, federally funded health program.

And now that such a program — run by Erie Family Health Center — is up and running in the Civic Center basement, it appears that gamble has paid off.

The remaining health department staff focuses on restaurant inspections and other public health hazards as well as wellness education programs in addition to maintaining the city's birth and death records.

In 2001, what's now Evanston's Community and Economic Development Department had 43 workers. By this year it was down to 31, a 27 percent reduction.

With the decline in construction activity in recent years, the city reduced the number of building inspectors and plan reviewers. But it has increased the number of employees whose job is to try to persuade new businesses to locae here.

The Public Works Department has dropped 25 percent — from 95 to 71 employees — largely as a result of farming out garbage collection to a private contractor and from various scheduling efficiencies.

What's now the Parks, Recreation and Community Services Department has dropped 16 percent — from 151 to 127 employees — as it absorbed the formerly separate Facilities Management and Human Relations units.

The Evanston Public Library suffered a 15 percent staff reduction — from 66 to 56 workers. That decline sparked a revolt by library fans, which ultimately led to a restructuring of the library's governance structure giving the appointed library board the right to impose its own tax levy.

The following groupings have done better than average

The Utilities Department has lost 4 percent of its staff — going from 58 to 55 workers.

The department has been insulated because it has its own revenue stream from water and sewer fees, and because city officials see it as a possible future revenue growth center — if the city can start selling water to additional nearby communities.

In this category we've lumped together the city's Administrative Services Department, which provides financial, human resources and various other shared services, as well as the city manager's office, the Law Department and expenses for the mayor, clerk and City Council.

The number of employees in this cluster has dropped just 3 percent — from 92 to 89.

Public safety is the only sector of city service that's seen any employment growth over the past dozen years, showing an increase of 3 percent..

One key question for aldermanic candidates this year will be what trends they see for city employment levels over the next four years — if the local economy booms, putters along or falls back into recession.

And another is how they would allocate any future cuts among different city services.