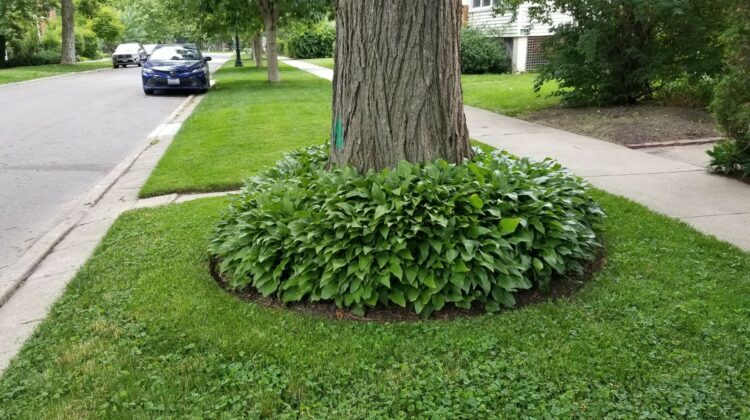 This ring of hostas around a parkway tree on Dewey Avenue would have subjected the homeowner to fines under the proposed ordinance. (Bill Smith photo)

After a community outcry, Evanston city officials have dropped plans for an ordinance that would have imposed new restrictions on what homeowners could plant in the parkway in front of their homes.

The city already limits parkway plantings to be no more than three feet tall. The new ordinance would have banned plantings around parkway trees and cut the height limit to 1.5 feet in areas near a crosswalk, intersection or alley.

It would have also created a set of fines that could reach $750 for a third violation.

The proposed ordinance, first reported by Evanston Now on July 10 drew condemnation from about 60 people who turned out for a public meeting on the issue on July 14.

And, in a memo released Friday afternoon with the city manager’s weekly report, Public Works Director Dave Stoneback said he was dropping plans for the new ordinance in instead planned to prepare a brochure outlining the existing restrictions — which include a requirement that residents obtain a permit from the public works agency before planting anything but turf grass in the parkway.