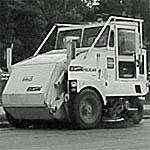 Evanston city officials are seeking public comment on a proposal that would reduce street sweeping on residential streets from 12 to 10 times a year but extend the street-sweeping seasion.

The change would also make it easier to provide signs clearly indicating when street sweeping is scheduled.

Public Works Director Suzette Robinson says the plan would shift residential street sweeping from once every three weeks between April 1 and Nov. 30 to once a month from March 1 to Dec. 31.

Current signs on residential streets specify what day of the week the streets are cleaned, but not which week the cleaning actually happens.

Under the new schedule signs could specify, for example, "3rd Thursday," to make the schedule clear.

A survey about the changes is available online and can also be completed by phone by calling 311 or by visiting the Civic Center, the Levy Senior Centr or the downtown public libary.

The schedule change would also shift cleaning on primary streets from every other week to twice a month.

The street cleaning schedule for streets with parking on one side only, which are currently swept once a month on Mondays, would not change.

The changes would take effect next year.

Robinson says extending the street cleaning season would also allow city crews to clear late fall leaves and debris from the streets, and get an earlier start in the spring.

The survey will be available through Friday, Aug. 21. The City Council is expected to decide in September whether to make the schedule changes based on public feedback and analysis.