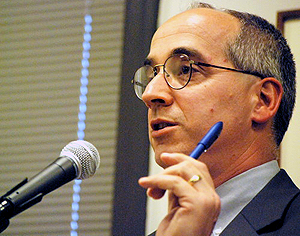 The city’s share of state income taxes is expected to be $6 million — 85 percent of the $7.05 million budgeted.

Building permits are expected to raise $3 million — 79 percent of the $3.8 million budgeted.

Lyons told aldermen at a special City Council meeting Wednesday night he also expects the city to come up short about $300,000 on investment income because short-term interest rates have dropped close to zero.

And across all the city’s other revenue sources he sees about a $600,000 shortfall for the fiscal year that began in March.

Lyons said he’s been working with city department heads on the 2 percent budget cut — expected to save $1.8 million. Much of the savings comes from leaving vacant positions unfilled.

For the first three months of the year actual spending totals $19.6 million, Lyons said. That’s 87.5 percent of what would be expected to be spent if spending was level across the year. But spending can vary substantially from month-to-month.

Lyons said the police department may go slightly over budget for the year because of beefed up summer patrols and that seasonal costs in the public works department, like snow removal, are hard to project.

He outlined six alternatives for closing the remaining budget gap:

Aldermen took no action on the additional budget reduction alternatives and seemed inclined to wait until the new city manager starts work Aug. 3 to address those issues.

Planning for next year’s city budget is also scheduled to begin in August.