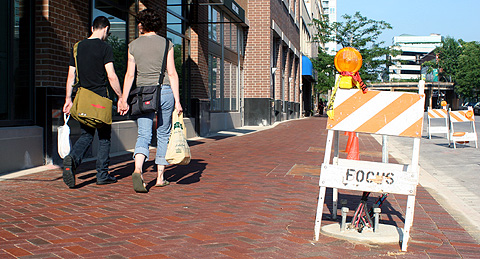 With the Sherman Plaza project nearing completion, the city’s Economic Development Committee this week focused on how to get the best mix of merchants in both new and older stores.

With the Sherman Plaza project nearing completion, the city’s Economic Development Committee this week focused on how to get the best mix of merchants in both new and older stores.

After months of walking in the street, pedestrians could use the new brick sidewalk along Church Street in front of Sherman Plaza this week, even if the street lights hadn’t yet been installed.

Ms. Aiello said a group of independent merchants, who originally organized around concerns about how their businesses might be disrupted during construction of the 1515 Chicago Ave. project that the City Council rejected this week, have urged the city to provide reduced parking rates for employees, create a parking validation system for customers and do more to help market downtown businesses.

Diane Williams, director of the downtown marketing group Evmark, said she’s been looking to Ann Arbor, Mich., for ideas, and plans to talk to officials in other college towns, perhaps Boulder, Col., and Cambridge, Mass., as well. 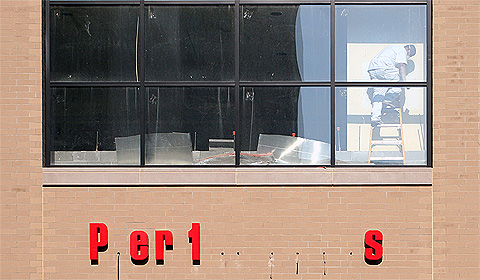 Ms. Aiello said there’s a growing body of planning literature about how to create an interesting retail mix.

“Is there a tipping point of having too many restaurants, and how would you decide?” are among the questions that need to be answered, she said.

The data we have from the downtown visioning study is that there is a good mix — at least across the whole of the downtown, she added.

“Is there a tipping point with cell phone stores and nail salons?” Alderman Melissa Wynne asked. “We do have too many of those!” Ms. Williams replied.

Ms. Aiello said part of the issue in attracting a good mix of national chains and independent merchants is having the right mix of old and new retail spaces.

Until recently Evanston was short on modern retail spaces, which typically are more open, with greater depth and larger total square footage than older buildings. The new spaces are what most national retailers want, she said.

However, Ms. Williams said, there are exceptions to that rule, including the furniture chain Design within Reach, located here in the former Varsity Theatre building, which always seeks out vintage space.

Modern spaces are not what a small independent, who may only be looking for 500 square feet, generally wants, Ms. Aiello said. In addition, the independent businesses are attracted to older buildings because they often rent for less. 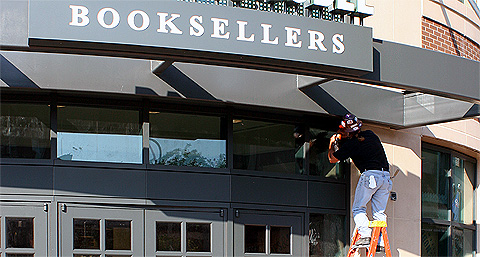 A worker caulks around a window above the new bookstore’s entrance.

The key for the city, she said, is to maintain a good supply of both types of space.

Another issue, she explained, is that landlords generally prefer to rent to national chains which have far better credit ratings, and will continue to pay rent through their lease term even if they decide to close a store.

“Susie, who wants to open a store because she likes to shop, just doesn’t appeal to them,” Ms. Aiello said. So the city, is trying to attract retailers who already are running a couple of stores elsewhere in the metro area and could open a third version of their concept here. That track record, she said, provides a lot more comfort to a landlord.

A Plan Commission subcommittee is also working to develop a new zoning scheme for downtown, which may try to assure that the city has the right sort of spaces for the merchant mix it seeks.

Although recent reports have suggested a cooling in the housing market nationally and locally, Ms. Aiello said sales went very well on the Sherman Plaza condos, especially on high-end units.

The project has 12 penthouse units, and Ms. Aiello says the developers now believe they could have sold twice as many. “We now tell developers we think there is pent-up market demand from people who are selling big homes and want to go into a condo, but not a little 1,100 square foot one.”

She said the first condo buyers are expected to start moving into their units at Sherman Plaza between the end of August and mid-September.