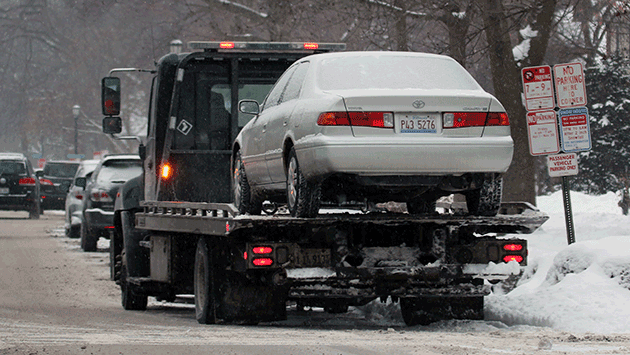 The City Council tonight is scheduled to approve contracts with 16 towing companies to haul away cars of drivers who violate parking regulations during daytime snow emergencies on side streets this winter.

Despite efforts to interest more local firms in the work, a staff memo says only two Evanston-based companies — North Shore Towing and Emergency Road Service — will have trucks on call this year.

Two other Evanston firms told staff they weren’t interested in the job and four more didn’t respond to inquiries.

Other firms, most from Chicago, but others from Alsip, Dolton, Hickory Hills and Schiller Park, will participate in the program.

Combined the 16 firms will provide a total of 22 trucks. That’s down from 25 trucks last year.

The tow companies get a $450 per truck retainer for the season and $80 per hour when they’re called out. They typically tow the car away from where it’s blocking snow removal operations and then return it after the plows have gone through.

Last snow season the city only declared one snow emergency, on Feb. 9-10, and paid contractors a total of $31,980. The contract for this year is authorized with a not-to-exceed cap of $60,000.

Last season 416 cars were towed during the snow emergency. If all the $155 towing tickets were paid, the city would have earned $59,210 from those tows.