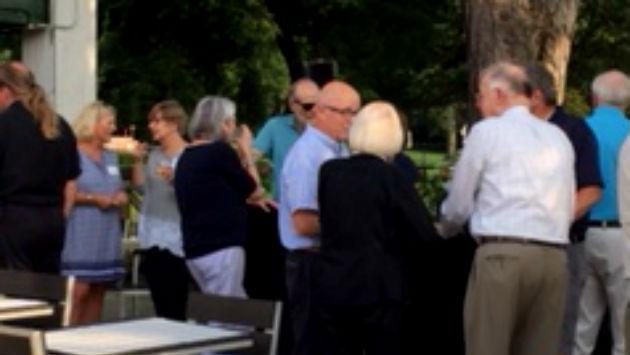 The City of Evanston recently received a $7,500 grant from a  partnership led by Commonwealth Edison to supplement earlier funding for ecological work along the North Shore Channel that runs through Evanston, according to environmental services coordinator Paul D’Agostino.

He said the funds will be used to supplement a $100,000 grant awarded to the city last year from the National Fish & Wildlife Foundation’s Chi-Cal Rivers Fund.that is being used to remove invasive plants and establish native plantings to encourage both migratory birds and pollinators at four locations along the North Shore Channel.

“This additional funding from ComEd will allow us to purchase additional plants this fall, as well as to expand these areas by continuing the clearing and planting into the 2019 season,” D’Agostino said.

News of the grant happened to come at about the same time that the Evanston Wilmette Golf Course Association held a reception yesterday afternoon for members of the Garden Club of Evanston to thank them for a similar grant to aid ecological efforts along the portion of the channel that includes an 18-hole golf course, commonly referred to as Canal Shores.

The ComEd grant was one of 26 grants of up to $10,000 each awarded to municipalities, park districts, and forest preserves to support open space projects.

This marks the sixth year that ComEd is partnering with Openlands, one of the oldest
metropolitan conservation organizations in the nation, for the Green Region Program. Due to
tremendous interest in pollinator conservation during the 2017 grant cycle, the 2018 ComEd
Green Region Program again featured a special focus on projects that help pollinators like
butterflies and bees, according to a news release announcing the grant program.

Illinois is home to thousands of native pollinator species, which provide
critical support to the region’s flowering and food plant populations.

Since the program’s inception, ComEd has awarded a total of more than $1,125,000 to communities in northern Illinois for environmental projects, according to the release.