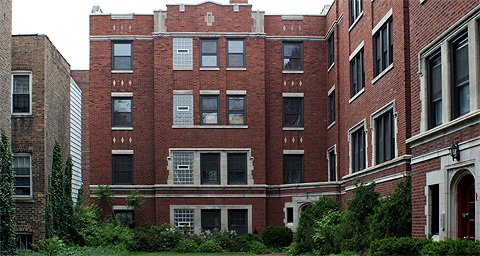 City officials this week told a developer to rip out the glass block windows he installed on the front facade of a condo conversion project at 2314-2316 Sherman Ave. and replace them with double-hung windows to match the others in the building.

2314-2316 Sherman Ave.
Developer John Majik told the Site Plan and Appearance Review Committee that the windows are adjacent to bathtubs and that water from the bathtub showers had gotten into the walls around the windows, causing the walls and flooring to rot out.

He said his architect told him the only solution to avoid a repeat of the water damage was to either brick up the windows or install the glass block.

But because the glass block windows weren’t shown on plans submitted to the city, officials refused to approve the work, saying it was done without permits.

Assistant Planning Director Dennis Marino said, â€œThe glass block really diminishes the value of what you’re trying to do with the conversion. The building has a classic look, and the glass block destroys it.â€

Community Development Director James Wolinski said a neighbor had complained about the glass block windows several months ago after they were first installed and that when the developer returned to the city for approvals on the project, it gave the city an opportunity to address the issue.