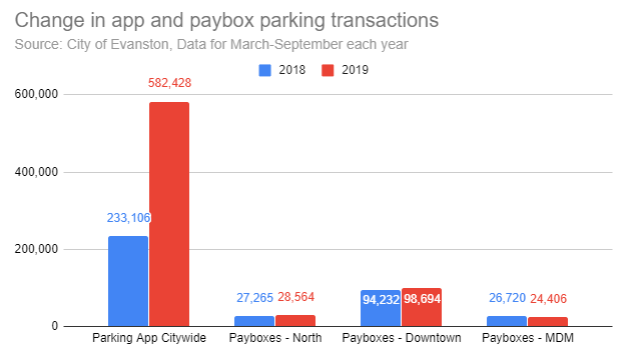 Evanston city officials say there’s no evidence to support claims that this year’s increase in hourly parking rates has driven shoppers away from the city.

The online app can be used for both on-street and surface-lot parking.

Transactions handled by the app grew by 150 percent comparing the period from March to September this year and last.

The increase in the hourly parking rate from $1 to $1.50 took effect March 1 this year.

And transactions conducted at payboxes increased 5 percent in downtown and along Central Street in north Evanston, while declining 9 percent in the Main Dempster Mile in south Evanston.

The number of minutes paid for with coins or credit cards at single-space parking meters dropped by 1 percent in North Evanston while increasing by 9 percent along the Main-Dempster Mile. Single-space meters have generally been eliminated downtown.

According to city budget reports, for the full year last year the parking app brought in $948,529 in revenue. For this year, through last week, the app had generated $1,501,255.

Last year the city’s parking meters and pay boxes produced $1.23 million in revenue. For this year, through last week, they’ve brought in $2.46 million.

City officials have expressed hopes that raising the on-street parking rates would encourage more drivers to use the city’s three downtown garages. And the data shows some modest evidence for that, with hourly rate parking revenue at the garages up 11 percent and garage monthly permit revenue up 2 percent.

The city’s 2020 budget calls for raising the hourly on-street parking rate from $1.50 to $2. That increase is anticipated to bring in an additional $3.2 million in new revenue.