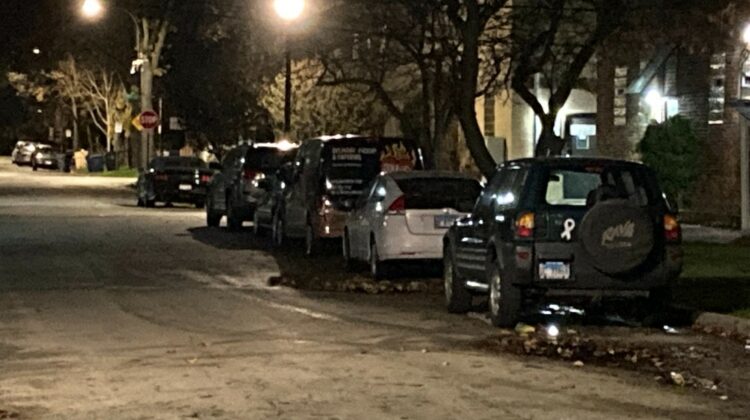 Cars parked in the 1600 block of Payne Street Wednesday night.

There are apparently times when Payne Street, in the Hill Arts District, looks like a used car lot, or even an abandoned car junkyard.

Because there are no parking restrictions in the 1500 and 1600 blocks, a memo from the city’s parking department says, “oftentimes vehicles are stored or abandoned on these blocks.”

And those stored or abandoned cars take spaces which otherwise would go to residents, or to employees or customers of nearby businesses.

The pain on Payne Street was one of several parking-related issues discussed at a meeting of 5th Ward residents and merchants Wednesday night with Ald. Bobby Burns (5th) and Michael Rivera, the city’s parking supervisor.

The session was at Double Clutch Brewery on Ashland Avenue, one of several new Hill Arts District businesses bringing workers and customers to the community.

But more workers and customers have led to another problem, turnover, or rather, the lack of it. When employees of a business can park on a street for free all day, it’s harder for merchants to get a continual flow of customers.

Rivera told Evanston Now that there are two ways to increase turnover, either by “assessing time limits or by assessing fees.”

On the other hand, businesses who have had free street parking for years are in no hurry to see it go.

Paul Boynton, of Kelvin Concrete Contractors, said his employees often come in overnight, and if they were still out working during the day when parking was limited to a few hours, those workers would be ticketed.

By meeting’s end, there was agreement on a six-month pilot program, to begin sometime next year if City Council approves.

The goal is to increase both turnover for businesses and street parking for residents.

That program would implement the following changes:

If the pilot program does not succeed, it would then either be back to the drawing board, or back to what caused the problems in the first place.