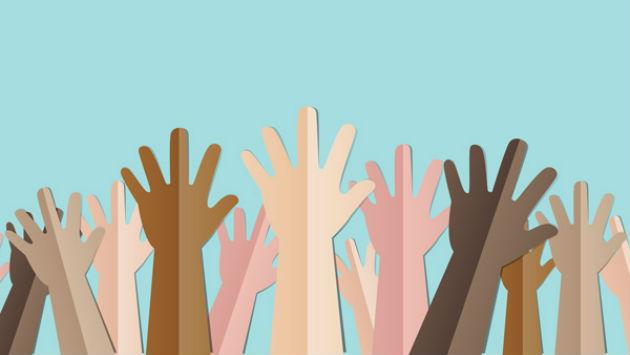 Evanston’s new equity and empowerment coordinator told about two dozen people this morning at the first in a series of workshops that she hopes to enlist them in developing a plan to involve members of traditionally underrepresented groups in the city’s decision making.

Patricia Efiom told the group — a mix of residents, city workers and elected officials gathered in a fourth floor conference room at the Civic Center — that equality isn’t enough.

Using an illustration of three people trying to look over a fence, she suggested that giving each of them a box to stand on wouldn’t be enough — if one of them was so tall he didn’t need a box, another was so short she needed two boxes and the third person was in a wheelchair and needed a ramp.

One challenge, she suggested, is that people who are concerned about the issue need to not take it upon themselves “to represent the other” but instead work “to include the other.”

Asked what issues the group should address, the first responses that participants offered were the achievement gap in the schools, a lack of low income housing and the cost of beach tokens.

But Alderman Delores Holmes, 5th Ward, said the achievement gap issue belonged to the school districts, not the city government. “We have to clean up our own house,” Holmes said, “and District 65 and 202 have to clean up their own houses.”

On the beach token issue, Betty Sue Ester said she’s paying taxes but not getting the benefit. “Chicago beaches are free,” she said, “and everybody pays taxes for them.”

But Efiom suggested that making tokens free might contain its own implicit bias, that people of color don’t have the money to go to the beach.

“I’m a person who wouldn’t go to the beach to save her soul,” Efiom, a former executive at Ebenezer AME Church, said, “I have the money to buy a token but won’t go.”

She suggested the city needs to get more input from a broader array of people about what they actually want before making decisions.

“If we’re pressing the agenda of the beach, people might say ‘I need a place to live’ instead,” she added.

Evonda Thomas, the city’s health director, said, “We have to build trust. At the end of the day, we’re the government, and there’s a perception people have about government. So if you’re going into the community to listen, you have to take time to build some level of trust to get the community to talk to you.”