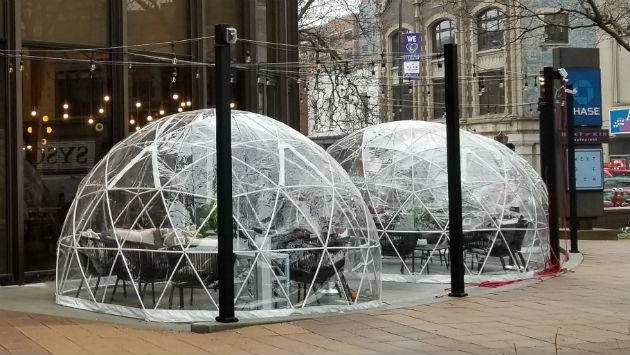 More outdoor dining igloos, like these seen at Next of Kin last winter, in our future?

It will not be ninety degrees forever. So the City of Evanston is working on outdoor dining plans to help the financially strapped restaurant industry survive when the temperature plunges into Illinois-normal range in winter.

Paul Zalmezak, the City’s Economic Development Manager, says the city staff is drafting winter dining guidelines, and he should have something to present in the next two to four weeks. Possibilities could include heat lamps, or any other safe way to keep diners warm and comfortable.

Kathleen McGrath, General Manager of Found Kitchen, says restaurants are being surveyed on “ideas on how to make it work.” She says “people aren’t comfortable” inside restaurants as long as the coronavirus is a nationwide threat, “so we absolutely support” continuing summertime outdoor dining into fall and winter.

Outdoor dining has been critical for eateries in this year of COVID. The number of indoor patrons is limited by the state, and, as noted, by customers themselves who won’t dine indoors.

But some restaurants will not be around this winter. They’ve already closed. The most recent casualty is The Stained Glass, which shut its doors August 15, after twenty years in business. Annie Coakley, of the Downtown Evanston marketing group, says the closing was pandemic-related. “They just couldn’t sustain” the lack of business, she says. “The uncertainty of NU was their other reason.” Northwestern students and their families spend a lot of money at Evanston restaurants. But Northwestern still does not know exactly how many students will be returning, as many classes will be held remotely.

While The Stained Glass closed for good, other restaurants are downsizing. Fewer hours and fewer customers means fewer employees are needed. Rob Strom, co-owner of another Evanston staple, the Prairie Moon, says he usually has 35 to 40 staffers. Now he’s down to 15. “We are all hurting,” he says. It’s “inevitable” that some restaurants will go under.

Panera Bread is another eatery with papered-up windows. According to the City, Panera is one of 36 Evanston businesses which closed between the start of the pandemic in March, and the end of July, costing the community around 100 jobs. Most of those businesses were home-based, although Panera and Barnes and Noble leave large empty footprints at prominent downtown locations. (Northwestern Medicine will move into the B&N building).

Over that same March-July time period, 27 new businesses opened or registered to open, including 11 home-based companies. The City estimates 64 new jobs from those businesses, although 26 are part-time.

So some businesses are still taking the chance on opening during the worst economic conditions imaginable.

And there is even a new restaurant on the horizon, although it’s unclear how far out. There are plans to fill the old Bar Louie location with another eating and drinking establishment.

Exterior work is taking place, and the Bar Louie facade has been removed … revealing the space used to house the Norman Franzen Cleaners. 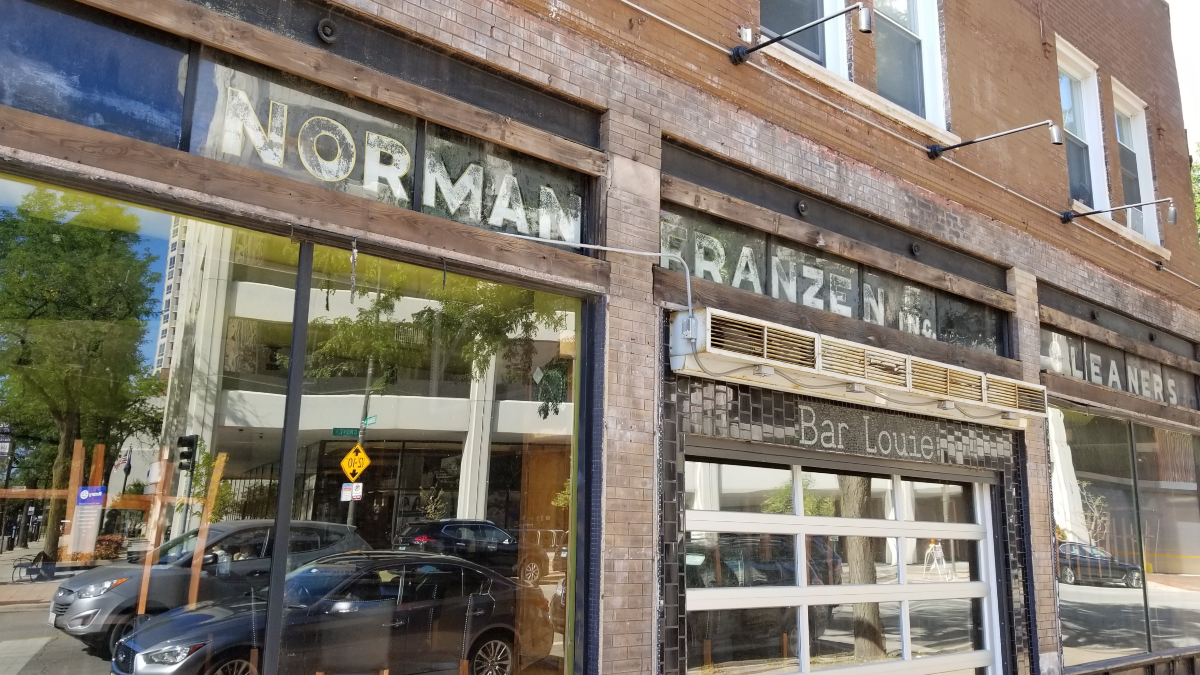 It’s been a while since that sign has seen the light of day.

The 1940 U.S. Census reveals that retail cleaning shop proprietor Norman Franzen that year was 37 years old and living with his wife Alta in an apartment building at 734 Monroe St.

So it’s presumably been a half century or so since Norman might have handed clean clothes across the counter to a customer.