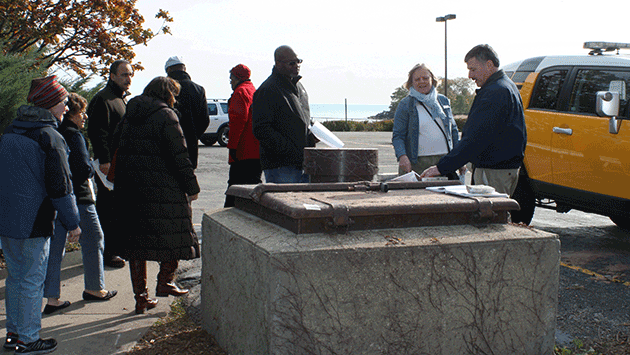 City officials took Evanston aldermen and a handful of curious residents on a bus tour of proposed capital improvement projects Saturday. And the really big-ticket stop was at the at the city’s water plant.

There, on top of an access hatch to the city’s 79-year old, five-million-gallon water reservoir, Utilities Director Dave Stoneback had laid out part of his case for spending about $26 million over the next several years on a replacement. 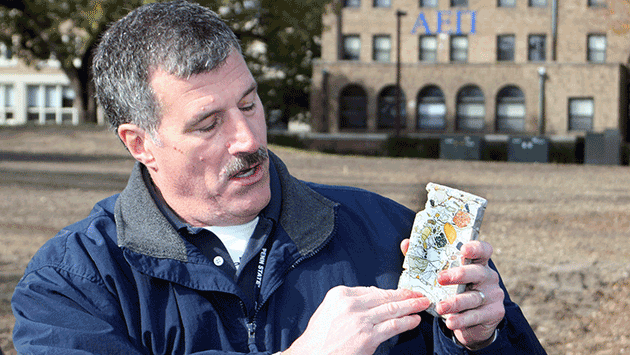 Stoneback said core samples of the reservoir roof takien by a consulting firm show that it’s deteriorating and needs replacement. 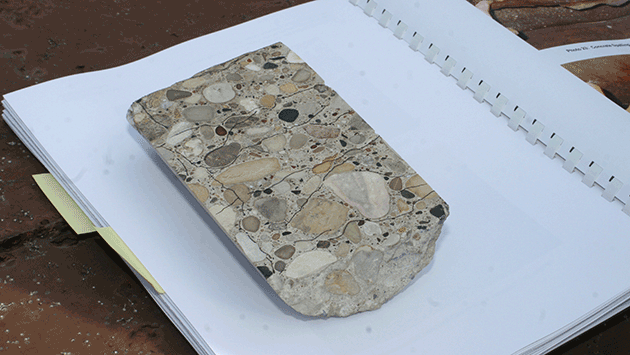 He said the dark horizontal lines running through the samples are signs that concrete is cracking and losing its strength.

The reservoir sits on land leased to the city by Northwestern University and the roof of the reservoir is used as an NU parking lot.

Replacing just the roof of the reservoir has been estimated to cost $4 million.

But Stoneback says the reservoir is undersized for the city’s current water demand and staff is exploring the possibility of adding more storage capacity — which would require a completely new reservoir.

The city has another five-million gallon reservoir within the water plant itself, and Stoneback says that with careful monitoring of plant operations, the city could get through the construction period for a new reservoir with just the single reservoir in service.

On a Google + Hangout this morning, Evanston Now’s Bill Smith asked City Manager Wally Bobkiewicz why the city is now leaning toward the much more expensive version of the project.

The reservoir also sits on land adjacent to planned new north-campus athletic facilities planned by the university and there’s discussion with the school about shifting the location of a new reservoir to better fit in with those plans.

Stoneback said the city had explored the idea of building a new reservoir on the university’s Long Field, just west of Sheridan Road.

But current design requirements for reservoirs demand that their tops be at least two feet above the adjacent terrain and also require an large overflow pipe that would need to run back to the lake.

Those factors, he said, seemed to make the Long Field location impractical.

Some residents have raised questions about whether an entirely new reservoir is actually needed, or whether the much less expensive roof replacement project would be sufficient.