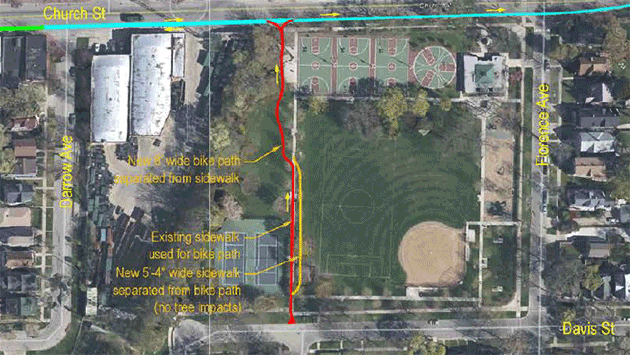 City staff detailed plans for completing Evanston's bike path along Church Street Monday night and plan to hold a public meeting about it next week.

Then from Pitner to McDaniel avenues a two-way, median-protected, on-street bike lane would run along the south side of Church Street.

That part of the project would require elimination of 24 parking spaces on the south side of Church.

Alderman Delores Holmes, 5th Ward, said additional off-street parking is available on side streets in the area that could make up for the lost parking spaces.

Alderman Jane Grover, 7th Ward, said that at a city-school committee meeting last week ETHS officials said they consider the path to be a critical connector for students riding their bikes to the high school.

Nagar said the exact solution to connect the path over the North Shore Channel to McCormick Boulevard and a planned Church Street bike route in Skokie still needs to be worked out with officials from state transportation department.

The public meeting on the bike path project is scheduled for 7 p.m. on Thursday, Nov. 6 at the Erie Community Health Center, 1285 Hartrey Ave.