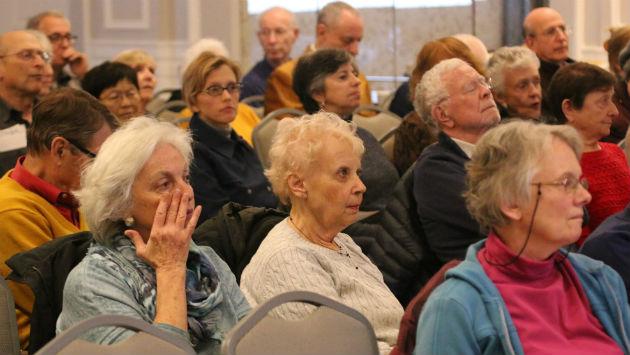 Despite growing concerns about the spread of the COVID-19 coronavirus, Evanston city officials plan to continue with the regular schedule of government meetings, at least for the time being.

Fears about spreading the virus have led to cancellation of several large conventions in Chicago — including, just this morning, a meeting of cardiologists that was scheduled to bring 29,000 visitors to McCormick Place later this month.

Storlie says plans for continuing to deliver services remotely have been developed and tested, but “we’re still developing some of the plans, including the one that deals with public meetings.”

“With the amount of technology we have, we could certainly figure out a way to accomplish public meetings if we couldn’t all physically be in the same room,” she says.

The state Open Meetings Act requires that government meetings be held at places “which are convenient and open to the public” and also requires that “a quorum of members of the public body must be physically present” at the meeting site.

It also requires that “any person shall be permitted an opportunity to address public officials” at the meeting.

Those restrictions mean that how to handle public meetings if concerns about the coronavirus grow “is an evolving conversation,” Storlie says, “and the open meetings act is likely to evolve with it. We will continue to discuss it with our state elected officials.”

In addition to tonight’s City Council and committeee meetings, the city calendar for the week includes a Preservation Commission meeting Tuesday, a Plan Commission meeting Wednesday and the mayor’s State of the City luncheon on Friday, along with several other meetings less likely to draw a crowd.

Update 4:05 p.m.: At a Chicago news conference this afternoon, Gov. J.B. Pritzker announced the identification of four new cases of COVID-19 in Chicago, raising the statewide total in Illinois to 11.

Two of the new cases — a woman in her 50s and another woman in her 70s — were family members of a case announced on Friday, a person who had been on a cruise and worked at a Chicago high school.

All four of the newly diagnosed persons are said to be in good condition.

Pritzker also announced that he’s issuing a disaster proclamation for the state designed to qualify it for federal aid to respond to the emergency. He says 13 other states have taken the same step.

Cook County Board President Toni Preckwinkle announced that the county is issuing a similar emergency declaration to qualify for additional federal funding to provide resources for public health efforts.

Pritzker says its clear there is going to be an increase in cases — and that the general trend of cases across the nation indicates that Illinois needs to do everything it can to respond to the situation.

Also at the news conference, Chicago Public Health Director Allison Arwady said the city has not made a decision to cancel any large public events, but that for persons who are over 60 or have an underlying medical condition, “We will be recommending that they avoid large mass gatherings.”