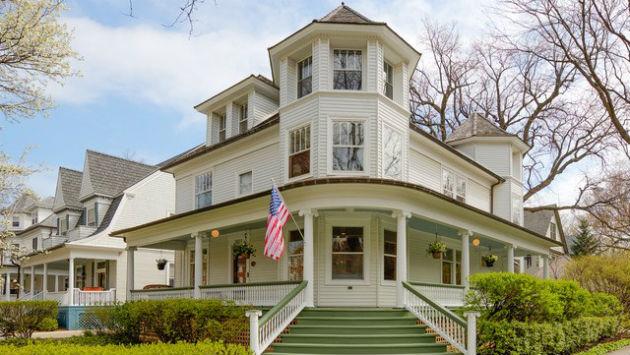 Evanston city officials are moving to block establishment of a group home for college students with mental health problems in a Victorian home at 2233 Sherman Ave.

Community Development Director Mark Muenzer this evening told Evanston Now that the city on Monday informed the attorney for Yellowbrick, the for-profit mental health service that purchased the building last week, that the facility, planned to house up to eight students, is not a permitted use in the R1 zoning district.

Muenzer says residential care homes, as defined in the zoning ordinance, are not permitted within 900 feet of each other and that another such facility is about 500 feet from the Sherman Avenue property.

Yellowbrick, on its website, calls the planned facility Campus Competence Services, which it describes as "a supported, sober living platform designed to enable emergeing young adults in college who have temporary or persistent mental health challenges and vulnerabilities to be successful personally and academically."

Yellowbrick, which is headquartered in the Rotary International building downtown, planned to charge $325 a day to patients in the program with a minimum three-month stay. It reportedly paid $1.065 million to buy the 4,200 square foot, five-bedroom home, located on the northeast corner of Sherman Avenue and Noyes Street, about two blocks from the Northwestern University campus.

The property had been on the market for over a year, originally listed for $1.25 million.

Muenzer says he hasn't yet received a response to the city's objections to the plan from Yellowbrick's attorney. He says that under the zoning code no more than three unrelated individuals could live in the building.