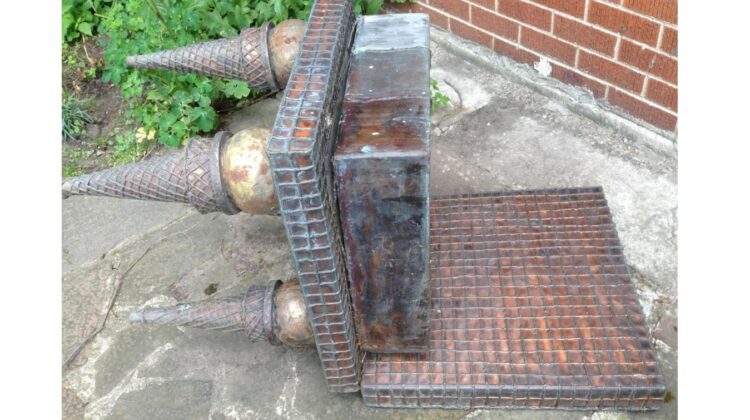 "Ice Cream Throne" by Rudolph Seno -- shown laying on its back because of a broken leg.

The stepdaughter of a Chicago artist who died 24 years ago is offering one of his works to the City of Evanston.

The Arts Council has recommended that the city accept the donation and the public works staff has suggested a location for it between Bates and Fullerton parks — north of Lincoln Street in the triangle formed by Ridge Avenue and the CTA Purple Line tracks.

Rudolph Seno titled his piece “Ice Cream Throne.” The fanciful but heavy work, composed of copper, bronze and steel, has ice cream cones taking the place of legs of a chair.

His stepdaughter, Michelle Stone, says the pattern on the chair’s seat and back represents a waffle cone and the cushion on the seat, perhaps a chocolate bar.

Stone has offered to cover the cost of repairing one of the cones that has broken away from the seat and of transporting and installing the sculpture at the Evanston site.

City staff say they’re concerned about the state of disrepair of the work, the durability of the repairs proposed and long-term maintenance costs to the city.

He was also known for setting a bicycling record recognized by the Guinness Book of World Records and was a partner with his brothers in Seno Formal Wear.

The City Council’s Human Services Committee is scheduled to vote on the donation at its meeting at 5 p.m. Monday.