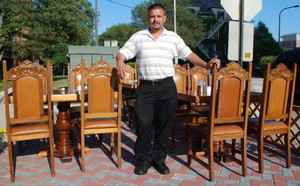 Evanston aldermen have permitted a local restaurant to set up a sidewalk cafe despite objections from some neighbors.

Placido Quintero, manager of Las Palmas, 817 University Place, argued the cafe would help offset the slower business he sees in the summer due to the absence of most Northwestern University students.

This year the economic recession has compounded the problem, he said. An outdoor cafe would make him an extra couple hundred dollars a day, allowing him to retain the hours of some of his employees, he said.

“We have a lot of employees who live in Evanston,” he said at a committee meeting on Monday. “We support their families.”

But residents of nearby apartments said the cafe’s three tables and 12 seats would disturb residents because of their proximity to adjacent apartments.

“We’re concerned with safety, with noise, with property values,” said Jane Driscoll, a resident of Sherman Gardens Apartments, 1860 Sherman Ave. Two-thirds of residents there signed a petition against the sidewalk cafe.

The nearest window of her building is eight feet from the patio, and it’s too close to the street, Driscoll said. 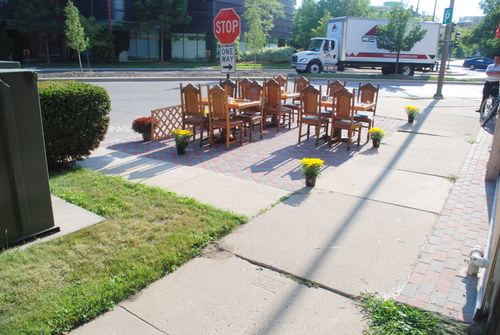 The view of the sidewalk cafe from the nearest apartment window

“You can’t expect people to have a drink and not talk and make noise,” said Bob Brower of 800 Elgin Road, the Optima Horizons condominium across the street. He said residents there voted 3-1 against the cafe.

“In the daytime we have people who work at home,” Driscoll said. “They’d be right next to the people having a good time at the nice restaurant, talking and laughing.”

Donald Schollenberger, a Sherman Gardens trustee and real-estate agent, said it would make nearby units “hard to sell.”

However, dissenters were matched by pro-cafe patrons like Evanston resident Sheila Brand of 1811 South Blvd.

“The city has an obligation to encourage and support our community’s business efforts in this slow economy,” said Naomi Angel of 2336 Prairie Ave.

Eight of nine aldermen approved the sidewalk cafe. The lone “nay” was Alderman Judy Fiske, 1st Ward, who argued that the council should postpone the decision until the city investigates alternatives to the sidewalk cafe as proposed.

But Alderman Ann Rainey, 8th Ward, said the permit would soon become useless if the city waits any longer this year.

“Delaying this is tantamount to denying this,” she said.

The permit expires this year to allow city staff to determine an alternative for next year.

The original proposal was for four tables. The council cut the one table closest to the adjacent building.

It also limited the cafe’s hours to 8 p.m. on weekdays and 9:30 p.m. on weekends. The restaurant must stop seating patrons outside at these times.

“I just don’t understand adults not being able to tolerate dining at 8 o’clock at night,” Rainey said. “It’s three tables.”

Top and below: Manager Placido Quintero stands by his restaurant’s new sidewalk cafe, which he set up on Tuesday. 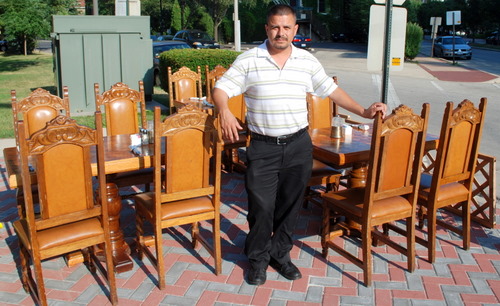