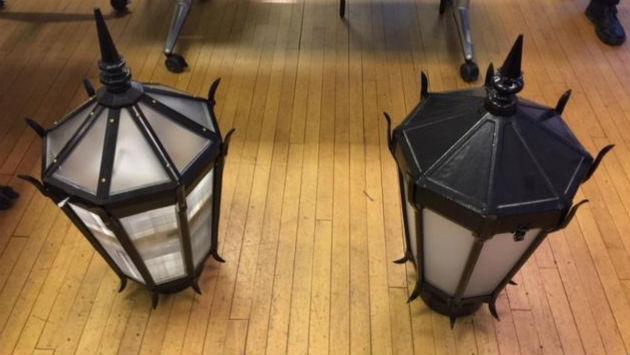 City officials have developed a plan to upgrade Evanston’s street lights while maintaining the look of the city’s traditional Tallmadge light fixtures.

A draft of the new street light master plan is scheduled to be discussed at a public meeting at 7 p.m. on Thursday, Nov. 1, in the Parasol Room at the Civic Center.

The plan calls for using a new LED light fixture, shown on the right in the photo above. The study rejects trying to retrofit the existing fixtures, like the one on the left in the photo, with new luminaires — saying they typically let too much light shine into the sky and don’t cast enough light onto the roadway.

The recommended fixture, from Sternberg Lighting of Roselle, Illinois, has three clusters of 14 light emitting diodes mounted under the opaque lid to aim light down toward the street.

The city has about 6,000 street lights including roughly 4,200 of the traditional Tallmadge fixtures.

A city consultant tested nighttime light levels on a sampling of city streets last year and found that most fail to meet existing city standards and nearly all fail to meet the higher standards called for by the Illuminating Engineers Society of North America.

A number of speakers at a meeting last fall disputed those conclusions, but results of a survey conducted this spring that’s included in the draft report indicate only about 10 percent of residents think the sampling of streets studied are too bright, while more than half think they’re too dark.

The goal of the Street Light Master Plan project is to develop a plan that identifies ways to meet the community’s future street lighting needs in a manner that reflects the community’s values as well as the context of the surrounding built and natural environments.

The study indicates upgrading the existing Tallmadge lighting system with the new, more efficient design would cost nearly $8 million. And the saving from reduced electric costs would amount to less than $70,000 a year.

Given that the city has no capital budget now for street light upgrades, any changes to the system are likely to be implemented only very gradually.