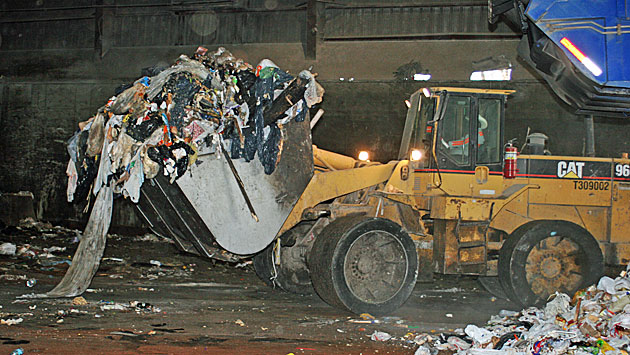 A front-end loader moves garbage at the waste transfer station on Church Street.

Those are described as regions “in which there are likely to be disparities in access to environmental assets or exposure to hazards.”

The resolution suggests the database would be used to “help identify existing burdens, needed infrastructure improvements and investments that can be considered” by the city.

The resolution claims that “generations of Black Evanstonians, along with Latinx and other communities of color in the City of Evanston have disproportionately experienced environmental injustice in the past.”

Activists have frequently cited the waste transfer station on Church Street as a source of negative impacts on the largely minority neighborhood nearby. But years of city efforts to close the station have failed because the state has refused to revoke its operating permit.

Recently neighbors complained about asphalt odors periodically emitted from the Tapecoat factory northeast of the transfer station site. That issue apparently was resolved earlier this year when the company agreed to stop producing the product that caused the odors at its Evanston location.

A staff memo accompanying the environmental justice resolution says activists have been seeking such a resolution from the city since 2014.