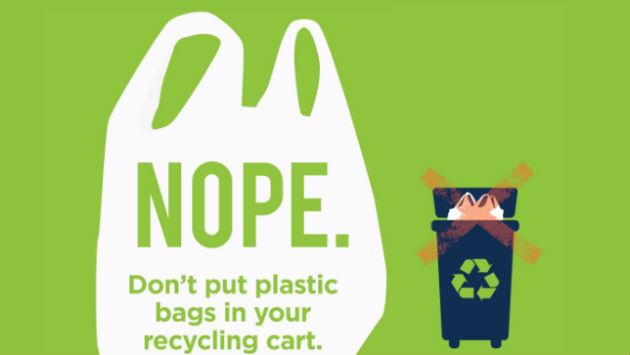 As Evanston works to achieve its Climate Action and Resilience Plan goal of Zero Waste by 2050, the city has launched a monthlong educational campaign to improve residents’ recycling habits and reduce the amount of waste sent to the landfill.

Through September, the City’s “Nope” campaign will highlight common items that mistakenly end up in recycling carts, disrupting the sorting process and resulting in less material recycled. Items that should not be placed in recycling carts include:

“We all want to do the right thing and recycle responsibly, but it’s important that materials that disrupt the recycling process are left out of our carts,” said Kevin Johnson, the City’s recycling and environmental maintenance supervisor. “Plastic bags are one of the biggest culprits, as they jam equipment used to sort recyclables. The good news is community members can recycle plastic bags at City community centers and grocery stores—just not in their recycling carts.”

To reach residents, the city will share a series of images and animated videos on social media and brand three city recycling trucks with informational messaging. Community members can also take the City’s Facebook quiz to test their recycling IQ. Videos, images and information about what can and can’t be recycled can be found online.