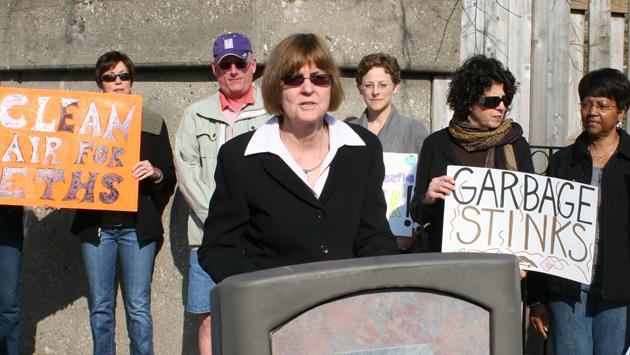 Evanston city officials today continued their campaign to oust a trash transfer station from a residential neighborhood by promoting a new transfer station proposed for an industrial area in Morton Grove.

Mayor Tisdahl and sign-toting neighborhood residents at the news conference.

Evanston city officials today continued their campaign to oust a trash transfer station from a residential neighborhood by promoting a new transfer station proposed for an industrial area in Morton Grove.

At a sidewalk news conference held outside the Veolia transfer station on Church Street, Mayor ElizabethTisdahl said she's supporting plans by Lakeshore Waste Services, which has the condo waste hauling contract in Evanston, to set up a transfer station at its headquarters at 6132 W. Oakton St. near Lehigh Road.

Tisdahl said the Morton Grove site, because it is in an industrial area and would have to meet current environmental requirements, would provide a much better location than the Veolia site in Evanston that is largely surrounded by homes and was grandfathered in over a quarter century ago under less stringent environmental rules.

The Morton Grove site is 5.1 miles southwest of the Veolia transfer station in Evanston.

Some neighbors in Evanston have complained that the Veolia station is little over a block away from Evanston Township High School and exposes students walking by to the smells and traffic hazards. By comparison, the Lakeshore Waste site is about a half mile from Niles West High School in Skokie. 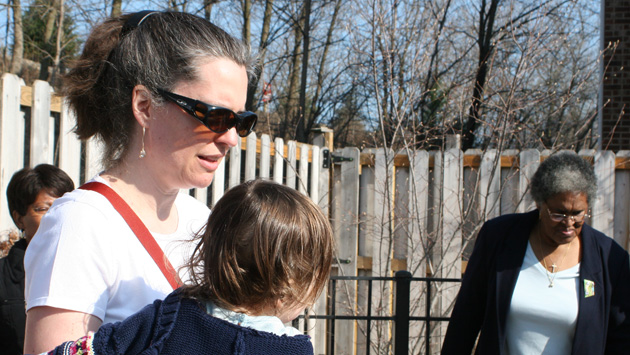 Neighbor Christine White, holding her child as she addressed the crowd, said Veolia should be ashamed of its behiavior and close the transfer station for the good of the community.

Tisdahl said it's an injustice to have the transfer station in a residential neighborhood.

The Lakeshore Waste proposal is now awaiting approval by state environmental officials and Tisdahl said she's urging officials at the state to approve it.

Veolia sued the city about three months to block its imposition of a $2 per ton trash transfer fee on loads dumped at the station.

City Attorney Grant Farrar said the company, a $50-billion dollar French conglomerate, has been using $500-an-hour attorneys to try to bully the city of Evanston. He said the city fee is valid under state law and that the city will continue to defend the fee and to prosecute Veolia in city administrative hearings for city code violations. 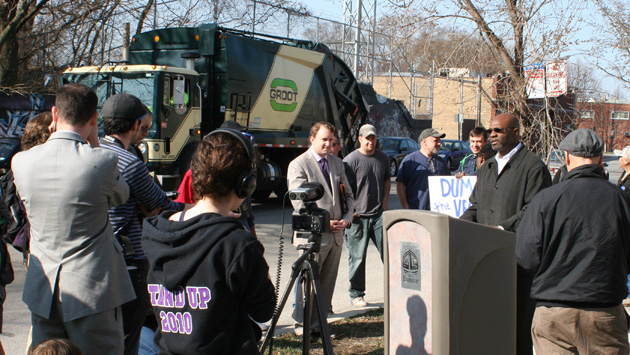 A garbage truck leaving the transfer station rumbles by as Alderman Peter Braithwaite, 2nd Ward speaks at the news conference.

Alderman Delores Holmes, 5th Ward, said neighbors have been complaining about the transfer station for decades, but the complaints were ignored until recently.

Public Works Director Suzette Robinson said Lakeshore officials have said village officials in Morton Grove and Skokie are not opposing the new transfer station proposal, because it is located in an industrial area.

Robinson said the city would encourage other waste haulers with city contracts to use the new Lakeshore facility, but that it has no power to require them to use it under existing contracts.