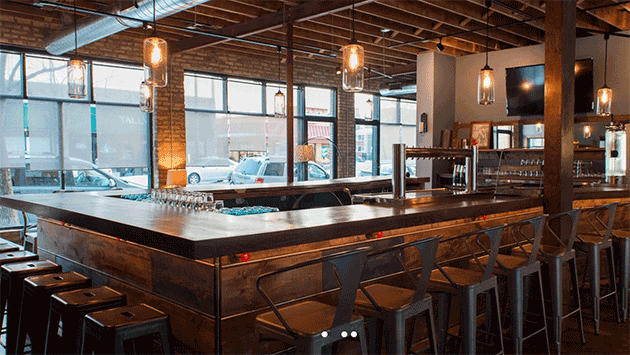 Evanston aldermen will be told tonight that the city has managed to show a modest profit on its investment in two restaurant-bar businesses on Howard Street.

A memo from Assistant City Manager Marty Lyons and Economic Development Manager Paul Zalmezak says the city has recouped all the money it put into Ward Eight and Peckish Pig.

The city purchased both buildings and spend a considerable sum on renovating the properties.

In the case of Ward Eight at 629 Howard St. the city invested a total of $437,650 in the property and has received $487,353 from rent payments, loan repayments and the purchase of the building by the business owners last year.

That’s a total return of 13.5 percent — or about 3.8 percent annually for the three-and-a-half years the money was outstanding.

That’s not a return that would make a banker happy, but it also turned what had been a derelict building into a going business that, the city officials estimate, is generating roughly $20,000 a year in additional liquor, sales and property tax revenue.

The report says the city essentially is breaking even on its investment in Peckish Pig 623 Howard St. — putting out $675,000 and anticipating getting back a total of $676,000 by the time the expected sale of the property to the business owners is completed later this year.

But Peckish Pig is generating substantially more in liquor, sales and property tax revenue — according to the report, about $74,000 a year.

Alderman Ann Rainey, 8th Ward, cites the two businesses as stabilizing factors on that stretch of Howard that have prompted several other desirable new businesses to open nearby.

But the economic development budget that in part funded these two projects has also had some notable failures — including the Chicago’s Home of Chicken and Waffles on Dempster Street and Davis Transportation — two deals on which the city lost its shirt.

City Manager Wally Bobkiewicz has proposed eliminating $400,000 in funding for the program in next year’s city budget.