The city council decided on Monday to enter a heated national contest for millions of federal stimulus dollars.

The council approved an application for $39 million in federal grant money for stabilizing communities hit hard by foreclosures.

“It’s got to be the largest grant the city of Evanston ever applied for,” alderman Ann Rainey said.

If Evanston wins the funds, it plans to use them to purchase and rehabilitate 100 vacant and foreclosed housing units and construct 97 new housing units.

The money is a slice of a $1.93 billion grant that the U.S. Department of Housing and Urban Development is handing out to cities across the country as part of the Recovery Act that Congress passed in February.

“We think we have a much better than average chance in terms of securing these funds nationally,” City Planning Director Dennis Marino said.

Evanston has a good track record of housing rehabilitation and is already a finalist for a similar grant for which it applied earlier this year, he said.

The city partnered with a for-profit developer, Brinshore Development, LLC , of Northbrook, to draft the application and will collaborate with it during the rehabilitation and construction process. 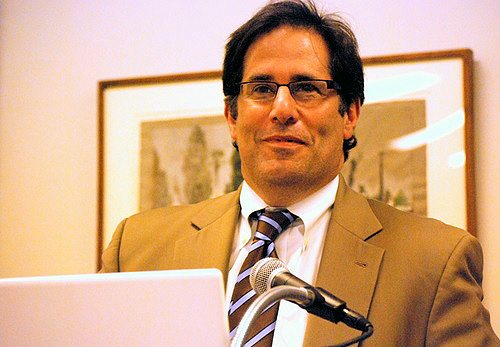 David Brint, CEO of Brinshore Development, LLC, describes projects his company has worked on the Planning and Development Committee meeting.

The city staff proposal describes Brinshore as the “one of the Midwest’s largest and most successful housing development firms in the affordable housing market.” The developer has a portfolio of 4,300 units in 40 residential communities valued in total at $1 Billion.

“The fact that we’ll have Brinshore as our partner will make a critical difference,” Marino said.

The city plans to target two census tracts that have been hard-hit by the foreclosure crisis. Its program will yield mixed-income housing for both owner-occupants and renters.

It plans to place the 97 new housing units in the Mayfair Corridor area along Emerson Street covered by the West Evanston Master Plan.

About half the rehabbed units would be owned by Brinshore and rented to families at or below 50 percent of area median income.

The city will know whether it will receive the money by December, Marino said.

“This will make a huge difference in our community,” Alderman Ann Rainey said. “Huge.”

View Evanston’s housing rehabilitation and construction plan in a larger map
The west side area targeted for the program (blue) is bounded by Church Street on the south, the North Shore channel on the west and north and Green Bay Road, Emerson, and Ashland Avenue on the east. It includes portions of the 2nd and 5th wards. The south Evanston area targeted for the program (red), part of the 8th Ward, is bounded by Howard Street on the south, Asbury Avenue on the west, Oakton Street on the North and the CTA tracks on the east.