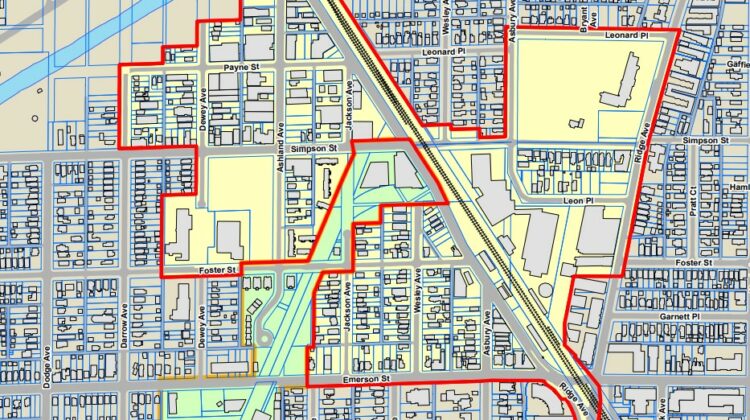 Most of the proposed TIF lies west of Ridge Avenue and east of Darrow Avenue, south of Leonard Place and north of Emerson Street.

Evanston officials say they’ve reached an intergovernmental agreement with School District 65 under which the school board promises not to contest establishment of the proposed new tax increment financing district in the 5th Ward.

Failure to reach that agreement earlier had led to postponement of the City Council vote to create the TIF district.

Under the agreement, scheduled for approval by City Council Monday night, the city makes an array of promises about how it will spend funds raised through the TIF.

In return, the school district pledges to “make good faith effort to pursue the establishment of a school” in the 5th Ward “without a referendum to the extent permitted by law.”

It also promises to implement minority, women and Evanston-based business contracting goals similar to those the city already has in place.

It does not commit the school district to retain ownership of the property it now leases to the city for use as Foster Field, just north of the Fleetwood-Jourdain Community Center.

It also bars the city from using TIF funds for eminent domain, neighborhood clearance, funding for a new Civic Center “or luxury residential development out of character with the existing community.”

The city also pledges to negotiate distribution of tax revenue to other taxing bodies if tax exempt property in the TIF district is converted to private use.

The bulk of the city’s promises were already included in a resolution introduced at the Sept. 13 City Council meeting.

The agreement also gives either party the right to seek injunctive relief for any violation of the agreement.

The intergovernmental agreement is one of two resolutions and three ordinances regarding the Five-Fifths TIF District that are scheduled for final action at Monday’s Council meeting. The meeting is scheduled to begin at 5:30 p.m.