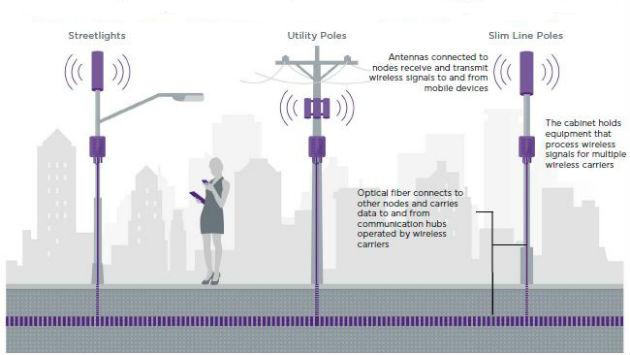 Evanston aldermen are scheduled to get a proposal from city staff later this month to adopt regulations about the placement of small cell towers or sites on poles within public rights of way.

Corporation Counsel Grant Farrar this week told aldermen that under state and federal laws the city has no authority to bar the introduction of small cell towers, nor can it consider "the environmental effects of radiofrequency emissions" in making location decisions.

But he said it can otherwise regulate their placement, construction and modification as long as it doesn't unreasonably discriminate among providers of functionally equivalent services.

Federal regulations also require the city to complete a review of proposed site locations within specified time perioods and give the providers the right to challenge the city's failure to meet those deadlines in court.

Small cell towers sites can be attached to utility poles and street light poles. They also are frequently used to expand coverage inside large buildings like sports arenas and some carriers also seek to lease space from landlords of private buildings for the devices.

Farrar says the city has received proposals from Verizon and from Mobilitie, which has worked as a service provider for Sprint, to install such equipment on ComEd utility poles. But he says the installations proposed so far are much smaller in scale than what's been seen in some other communities.

He said some of the devices could stick up as much as eight feet or so above the top of a utility pole.

While there's potential for the city to earn lease revenue if the sites are placed on city-owned infrastructure like lght poles, Farrar says the city hasn't received any requests for such leases yet.

Farrar says the ordinance he is preparing would call for review of cell site plans by both the city's Community Development Department and Public Works Agency.