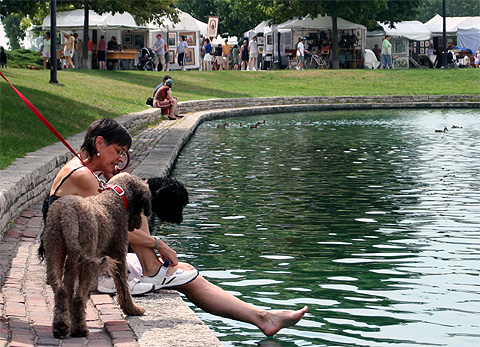 The City Council has voted to hire Hitchcock Design Group of Naperville to conduct a series of community meetings to develop concepts for redeveloping Evanston’s lakefront parks.

A visitor cools off at the lagoon at Dawes park during this summer’s Lakefront Arts Festival.

The $49,500 contract was approved Monday night after aldermen told city staff to expand the scope of their vision.

Staff had proposed looking just at the uninterrupted stretch of parkland from the Lee Street to the Clark Street beaches. But the aldermen said they wanted the city’s other beaches, at South Boulevard and Lighthouse Park, included in the planning process as well.

Paul D’Augustino of the city’s parks department said the visioning process is expected to be finished by January or February of next year. After that the city will start developing a master plan for the parks. Implementation of that plan, he said, could take five to ten years, depending on available funding.

A staff memo on the project said that the lakefront parks suffer from deteriorated restrooms and boat launch facilities, a substandard bike and pedestrian pathway system and inadequate lighting and concession facilities, among other problems.

Some aldermen voiced concerns that the planning process not be dominated by residents of the immediate lakefront area, who have tended to oppose more intensive use of the parks because of noise and other issues.

Assistant City Manager Judy Aiello said that people from throughout the city will be invited to take part in the planning.

Alderman Lionel Jean-Baptiste, 2nd Ward, suggested that the city seek private funding for some portions of the redevelopment of the lakefront. “The lakefront community fights for its own interests in terms of limiting use to avoid abuse,” he said, “At the same time tax dollars from the whole city are being invested there. It would be great to have these entities pitch in,” he said.