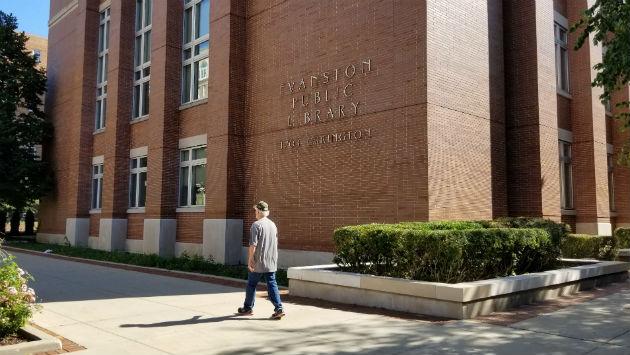 Evanston aldermen Tuesday are scheduled to discuss plans for setting up a temporary city hall that might be located on the third floor of the downtown public library.

With the COVID-19 pandemic mandating new social distancing rules in offices and the current Civic Center at 2100 Ridge Ave. needing an estimated $12 million to $17 million in capital improvements, aldermen earlier this month asked staff to prepare information about options for setting up temporary office space downtown for city workers who need to interact frequently with the public and about the possibility of selling the existing Civic Center.

A memo from City Engineer Lara Biggs says about 210 city employees worked at the Civic Center before the pandemic, but estimates that only a fraction of them, 50 to 70 people. would need to be housed in the new temporary office space.

She says some of the rest could work from other city buildings like the service center and recreation centers and the rest could either work remotely or have staggered shifts at the temporary new city hall.

Biggs says the library, at 1703 Orrington Ave., “has substantial underutilized space, primarily on the third floor, that could be converted to civic center functions.”

Alternatively, she says, the city could rent vacant commercial office space downtown. That might include a consolidated service desk, combining the collector’s office, parks and recreation program sign-up, beach token sales and other services in a storefront that could be configured to minimize or eliminate direct contact between employees and the public.

But that option would require paying rent, which could be avoided at the city-owned library building.

The memo says staff still needs to do more research about finding locations for public meetings, once those are allowed to resume, but indicates staff is aware of several locations that could meet those needs.

The current Civic Center has about 140,000 square feet of office space, which city officials have considered to be substantially more than the amount the city actually need, even before the pandemic led to an increase in people working from home.

The city has at times considered potential alternatives to the existing building for over two decades.