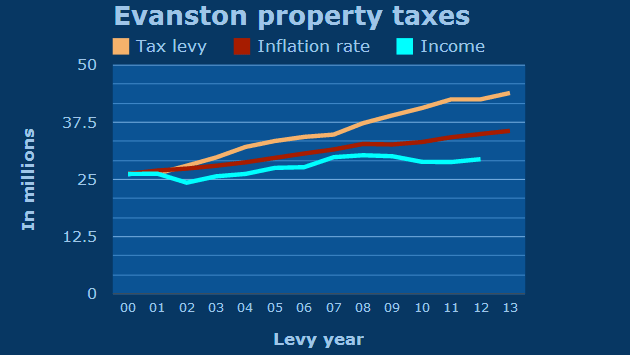 Back in 2007, city officials forecast that if trends continued, Evanston would be running a general fund budget deficit of more than $10 million a year by now.

But through a combination of layoffs, smaller pay hikes and increases in taxes and fees, the city managed to finish 2013 with that $10 million projected shortfall erased.

And it did it despite having $2.6 million less in revenue last year than had been forecast by then City Manager Julia Carroll back in 2007.

To aid in comparing the actual numbers to the projections, Evanston Now has added back into the general fund figures for 2013 revenues and expenses for library and solid waste programs that were spun off into their own separate funds in the years after the projections were prepared.

The biggest saving was achieved by reducing the city's full-time-equivalent employee headcount from 884 in 2006-07 to 789 by 2013. That number has started creeping back up, though — to 805 this year.

In addition, annual employee pay increases were cut by roughly half from what they had been running before the budget crunch and, for a while employees, were also required to take unpaid furlough days.

City officials also managed to shift some services that previously had been provided by the city — like health services for low income residents — to largely federally funded external providers.

But residents were also asked to sacrifice, as they saw property tax rates rise far faster than inflation and incomes, although the rate of increase moderated somewhat recently.

But the 2007 report also noted major concerns about unfunded capital projects — and those issues have yet to be fully addressed.

That's why, Bobkiewicz says, the City Council has made financial planning one of its key goals for this year.