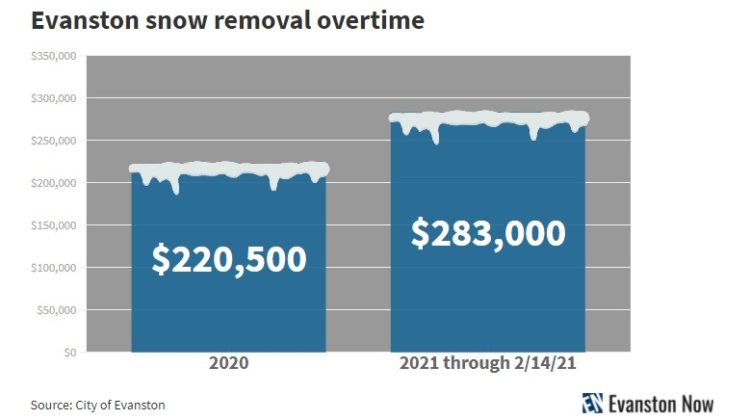 You could call it “snowvertime” … overtime costs to the City of Evanston for snow removal. And in just the first six weeks of 2021, the city has spent more on staff overtime for salting and plowing the streets than it did in all of 2020.

According to the Public Works Agency, for all of last year, the employee overtime cost for snow cleanup was $220,500. So far this year, from Jan. 1 through Feb. 14, it was $283,000 — and that does not include expenses from the 18-inch snowfall over the past few days. Those costs will not be calculated, city spokesperson Patrick Deignan says, until the current pay period concludes at the end of this month.

Once those expenses are added in, it’s possible the city will exceed the $325,000 total budgeted for “snowvertime” this entire year, and that’s without any more snow this month. If the appropriated amount is exceeded, Deignan tells Evanston Now, funds will have to be moved around within the total city budget.

Overtime builds up quickly when a huge snowfall hits. City crews were working 12-hour shifts around the clock because of the recent storm. And the work is far from finished. On its website, the city says “due to the enormous amounts of snow, it is anticipated that cleanup efforts will continue throughout this week.”