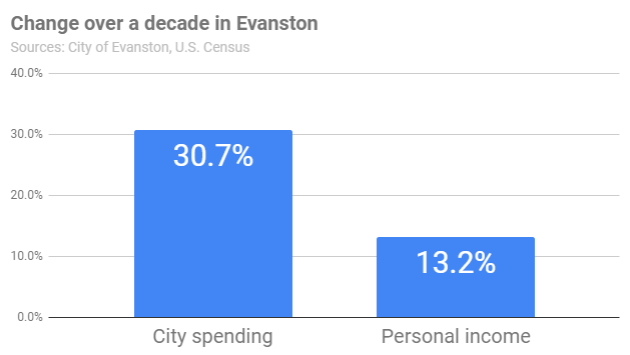 Over the past decade spending by Evanston’s city government has grown at more than double the rate of increase in the income of Evanstonians.

Despite a modest reduction in projected net city spending for 2019 compared to this year in the budget CIty Council adopted earlier this month, the city’s spending next year will be 30.7 percent higher than it was a decade ago.

Meanwhile, the Census Bureau reports that the total personal income of Evanston residents — that’s per capita income times the city’s population — has grown by just 13.2 percent in the 10 years ending in 2017, the most recent period for which such income data is available.

A major factor driving those increased costs is that city workers have negotiated pay hikes over the past decade that have substantially exceeded the income gains seen by most city residents.

One response to try to bring the budget under control has been to reduce the number of city workers.

City staffing has tended to drop whenever the city faces a budget crunch, but creeps back up once the crisis is past.

City Manager Wally Bobkiewicz proposed cuts for next year that would have reduced the payroll to 776 full-time-equivalent employees.

But aldermen rejected most of those cuts, so the city FTE staff count for next year will stand at 795 instead, down just a dozen from this year.

Those changes were largely driven by complaints from residents who said they didn’t want to see services cut.

Residents who say higher taxes are driving them out of town were much less visible during the budget debates.

Balancing the 2019 budget was also based on the assumption that the city’s workers will agree to no general wage increase for next year in contracts that are still being negotiated.

Bobkiewicz today said he doesn’t expect final agreements on any of those contracts to be reached until after the start of the new year.