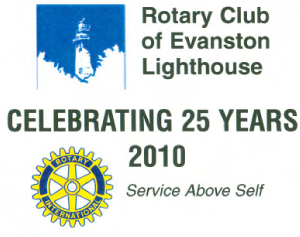 You’ll have a choice of vehicle stickers next year — thanks to a City Council compromise Monday.

You’ll have a choice of vehicle stickers next year — thanks to a City Council compromise Monday.

Four non-profit groups sought the chance for free advertising on the stickers and the aldermen decided to break with the tradition of having only one sticker design — approving two for 2010 and another two for 2011.

“There are many people in this community who could benefit from our services but don’t know about us, so having the vehicle sticker would be very helpful,” said Ellen Browne, president of Seniors Action Services, Inc., which assists the elderly.

After hearing from representatives from each applicant, a committee decided the city will print two 2010 parking stickers — one for the McGaw YMCA and the other for the Rotary Club of Evanston Lighthouse.

One of the sticker designs.

The committee selected those two because they are each marking notable anniversaries.

The other two applicants, Senior Action Services and the Evanston Baseball & Softball Association, walked away with guarantees that their artwork would be on stickers in 2011.

“If we went to too many different patterns, it would be difficult on parts of the staff,” he said at the committee meeting.

Staff may inadvertently ticket innocent drivers because of it, he said, adding that he’ll report back to aldermen if complaints arise next year.

“We’re going to make sure that doesn’t happen,” said Alderman Ann Rainey, 8th Ward, who originally proposed the compromise at the committee meeting.

The new sticker order forms, which the city will mail in November, will let customers choose which sticker they wanted.

The city planned to print 25,000 stickers of a single design for $3,850. Printing two different stickers will cost the city “a couple hundred dollars” extra, Lyons said.