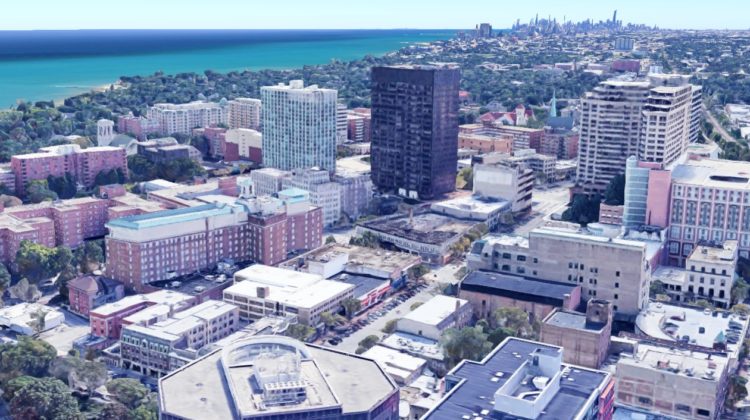 An aerial view of downtown Evanston from Google Maps.

Evanston aldermen are scheduled to discuss tonight a city staff proposal to respond to the COVID-19 crisis with a new economic development strategy.

The plan, detailed in a memo from Economic Development Manager Paul Zalmezak, urges that city offices be moved downtown to generate more customers for local restaurants and shops.

It also recommends that the city sell some city-owned property, presumably including the existing Civic Center, to generate cash, reduce expenses, expand the property tax base and consolidate city operations.

The memo also calls for creating new requirements to dress up vacant storefronts and to provide semi-permanent winter dining options like domes or greenhouses.

And it suggests the city should:

Zalmezak says he anticipates it will be 2022 before downtown office buildings return to full occupancy and the city’s initiatives to respond to the panedemic will require a two- to three-year outlook to have a major impact.

“We cannot depend on residents alone to cover the cost of city services,” Zalmezak says in the memo, and the city can help make the community stronger for all Evanstonians in the long term “by proactively making these difficult decisions in the short term.”