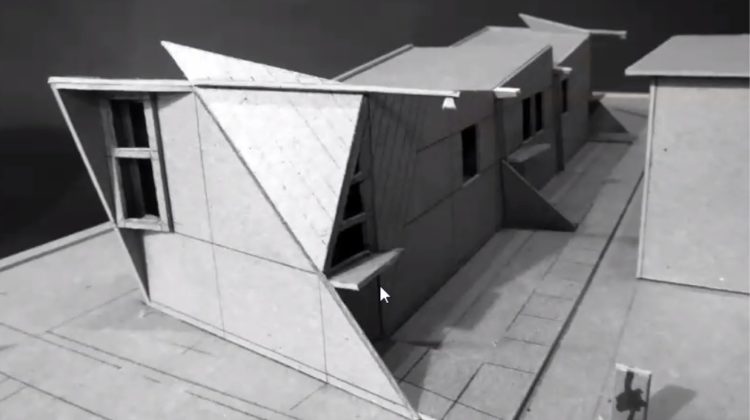 A model of the 1310 Hartrey development.

Evanston’s Plan Commission Wednesday will review a proposal from city staff to make live-work units a permitted use in many areas of the city.

Until now the units, which combine living quarters and space for a business under the same roof, have most often been approved as adaptive reuses of existing structures in Mixed Use Employment zoning districts — areas mostly along current or former rail lines that already have a mix of commercial, industrial and residential uses in close proximity — or as part of large, new-construction planned developments.

Under the staff proposal, live-work units would become permitted uses in all zones of the city except residential and university zones.

That would still preclude their creation in the vast majority of Evanston, but would open up business, commercial, downtown, industrial zones and several overlay districts for live-work units as a permitted use.

The text amendment proposed by staff goes beyond a request that that Plan Commission will also hear Wednesday, from live-work developer Andrew Spatz, who is seeking to have such uses approved for a new-construction, three-unit project he’s developing at 1310 Hartrey Ave. in a C2 zone.

In a memo to the Commission, Community Development Director Johanna Nyden says a version of a live-work unit has been common for many years — in the form of small ground-floor shops topped by living quarters for the shopkeeper upstairs.

“More recently,” she says, “They have become more prevalent for artists, skilled-trade workers, entrepreneurs, or self-employed professional service workers.” In the newer model, she adds, “work and living areas are not always separated by a floor change and instead may blend into one another, or only be separated by a demising wall.”

The memo says live-work arrangements cut commuting costs and can reduce overhead for a business and trim living expenses by eliminating the need to rent two separate locations.

Until now, Nyden says, the city has approved live-work units as an accessory use to permitted or special uses in a given zoning district.

The new proposal would add new limits on the mix of residential and work space in live-work units — saying no more than 49 percent of the floor area, excluding bathrooms, could be used for residential purposes.

The staff recommendation would also bar use of live-work units as vacation rentals.

And it would require that the non-residential activity be “visible from the public right-of-way.” That last requirement would appear to conflict with the proposed design of the Spatz property at 1310 Hartrey, where the three units face onto the north side yard of the property.

The Plan Commission meeting is scheduled for 7 p.m. Wednesday and will be viewable on Zoom and the city’s video channel.