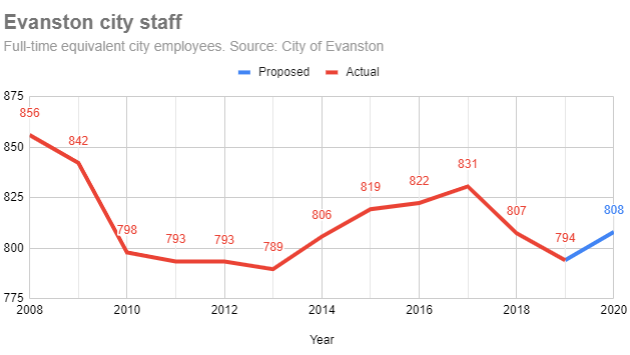 After dipping below the 800 level this year to close a multi-million dollar budget gap, the City of Evanston’s projected full-time-equivalent staff will rise to 808 in 2020, if aldermen adopt the proposed city budget released by Interim City Manager Erika Storlie today.

The budget proposed for this year by then City Manager Wally Bobkiewicz had called for even deeper staffing cuts — to a total of 776 FTE employees — but many of those cuts were reversed by the City Council in the face of protests by city workers and their supporters.

Now Storlie is calling for adding 4.5 workers in the Parks Department to staff the new Robert Crown Community Center scheduled to open in January, plus more library employees to staff the new branch there and three new employees for city human services programs.

Storlie says the new Crown Center will be much larger than the existing facility, requiring the additional staff, and that residents made clear during last year’s budget debate how much they value the city’s human services programs.

In line with that, Storlie is also proposing that the city create a separate fund for human services programs — pulling that out of the General Fund, so it will show up separately in budget documents.

Where the human services progams drew $2.5 million in spending from the General Fund in 2019, they’re projected to have a $3.3 million spending level as a separate fund next year.

The total projected spending by the city next year is $317.3 million including interfund transfers. That’s down about $1.9 million from this year.

Storlie projects that the spending will decline further to $299 million in 2021 as construction work on the Crown Center and a new water reservoir are completed.

The city for the first time this year is creating a two-year budget document designed to make for better long-term planning. But only the 2020 portion of the budget will actually be adopted by the Council — with the second year’s segment just to serve as a guide for planning.

Spending from the city’s general fund is expected to increase $2.1 million next year. Most of that increase — $1.5 million  — is expected to be covered by a 0.25 percent boost in the home rule sales tax that aldermen adopted on a split vote last month.

The city also expects to take in over $900,000 in new revenue from expanded programs and rental fees at the Crown Center.

But at the same time it anticipates some drop off in revenue from several sources, including the real state transfer tax, the tax on landline phones and the cable franchise fee.

The city earlier this year signed four-year contracts with its four employee unions which call for pay increases of between 1.5% and 2.5% in 2020.