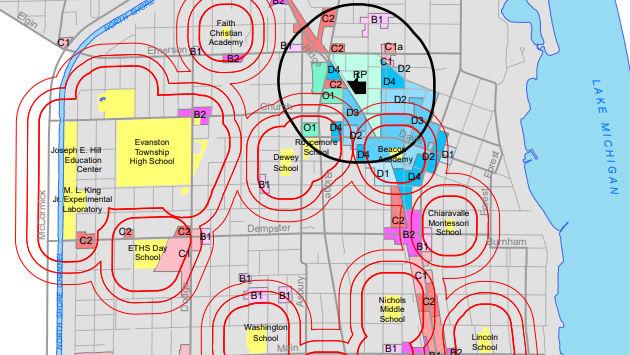 Evanston aldermen Monday are scheduled to discuss a new ordinance that would permit cannabis dispensaries in Evanston as special uses in business-related districts but bar their location within 750 feet of an elementary, middle or high school.

The regulation would also require cannabis dispensaries to be at least 1,500 feet from each other.

The proposed ordinance was recommended for approval unanimously by the Plan Commisssion at a meeting last month.

The local ordinance is designed to work with a new state law going into effect Jan. 1 that legalizes recreational cannabis dispensaries. Illinois has had medical marijuana dispensaries since 2015, including one in the city’s Maple Avenue parking garage downtown.

PharmaCann, the operator of that dispensary, plans to seek to expand to offer recreational cannabis sales at that location.

A map prepared by city staff indicates that under the proposed zoning additional dispensaries would be allowed in part or all of certain shopping districts along  Central, Dempster, Howard, Oakton, Main and Noyes streets and along Elgin, Green Bay and Gross Point roads and Chicago and Crawford avenues.

Others, including Bolingbrook, Lincolnwood, Naperville, Wheaton and Wilmette, have voted to prohibit them.