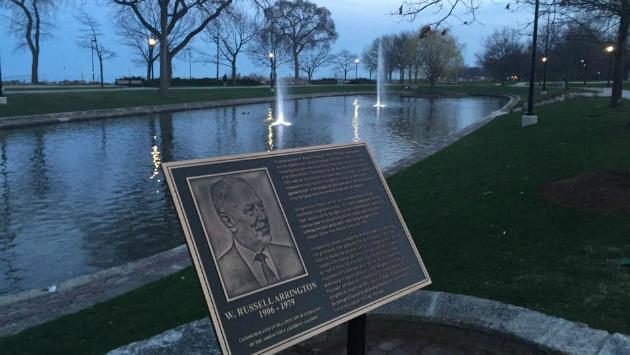 The City of Evanston will kick off the summer Starlight Concert series on Saturday, June 6, with the dedication of the Arrington Lakefront Lagoon at Dawes Park.

The renovation project, funded by a $500,000 donation from the Arrington Foundation and a $400,000 Illinois Department of Natural Resources Open Space Lands Acquisition and Development Grant, rebuilt the stonework around the lagoon in Dawes Park and made numerous other improvements to the facility.

The reopening celebration starts at 3:30 p.m. and wine, beer and food will be available for purchase from Sips on Sherman, Temperance Beer Co., and Kefi Greek Tavern.

In the event of rain, the Starlight Concert will be relocated to Temperance Beer Co., at 2000 Dempster St. in Evanston.  But, the dedication will be held in Dawes Park from 3:30 p.m. to 4 p.m., rain or shine.

The Arrington Foundation will be represented by Michael B. Arrington, an Evanston resident and the Foundation’s President and Chief Executive Officer, as well as other family members. The City is naming Dawes Park's lagoon the Arrington Lakefront Lagoon in memory of Michael Arrington’s father, the late W. Russell Arrington, who represented Evanston in the Illinois General Assembly from 1945 to 1973.

The project earned the City of Evanston Public Works Department and its contractor, Clauss Brothers, Inc., the American Public Works Association’s Suburban Branch and Chicago Metro Regional Chapter’s “Public Works Project of the Year” Award in the category of Historical Restoration/Preservation for projects less than $5 million.