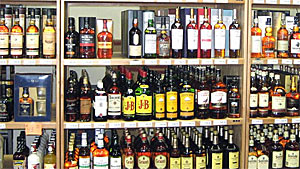 Evanston Mayor Elizabeth Tisdahl says she plans to start getting regular reports from local supermarkets about how much of their liquor slips out the door without being paid for.

At a meeting of the city's Liquor Control Review Board this morning Tisdahl said the city lacks sufficient information now to determine just how serious the theft problem is.

The issue has arisen recently in the debate over establishment of a police outpost at the Dominick's supermarket on Dempster Street, with some neighbors complaining that the store's layout makes it more vunerable to thefts.

Police Chief Richard Eddington, who worked with Dominick's officials to set up the outpost in an entryway to the Dempster Street store, said he's particularly concerned about students from nearby Evanston Township High School ending up with criminal records as a result of a rash decision to steal liquor.

Eddington says he hopes a greater police presence can help discourage such activity.

But liquor thefts are also a problem at other local markets. For example, just today police reported three liquor thefts Tuesday evening at the Jewel supermarket on Chicago Avenue, all of which led to arrests. None of those arrested were teenagers.

Corporation Counsel Grant Farrar said that requiring the stores to report how big the discrepancy is between their inventory reports and what they've sold is something that's within the mayor's power as the city's liquor commissioner.

"It's consistent with our power to regulate sales," Farrar said. "We're entitled to the information."

The mayor said that once the city knows whether different stores have different inventory shrinkage problems it will be in a better position to work with the owners on possible redesigns of their sales space or other efforts to control the problem.

"It's our responsibility as the liquor commission to take a look, see if its a major issue and then discuss it and see what we want to do," Tisdahl said.

In other business, the board agreed to:

All those changes will require City Council approval.