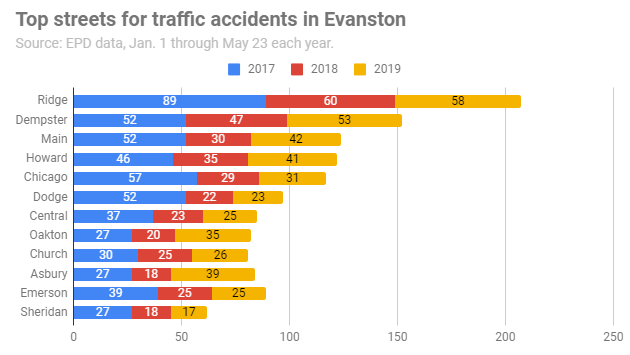 Evanston aldermen Tuesday are scheduled to approve a plan by city staff to apply for a $700,000 state grant to improve traffic signals on Ridge Avenue — the street that sees the highest number of traffic accidents in the city.

If the city receives the Highway Safety Improvement Program grant from the Illinois Department of Transportation, the money would go to fund improvements to the intersections of Ridge with Oakton, Main, Greenleaf, Dempster, Lake, Davis and Church streets, all of which are already signalized intersections.

The chart above shows the number of accidents so far this year and for the same time period the past two years on the 12 Evanston streets with the highest frequency of accidents.

The data shows a sharp decline in accidents on Ridge Avenue from 2017 to 2018 after the speed limit was reduced from 30 to 25 miles per hour, turns were restricted at some non-signalized intersections and traffic signal timing was changed at the Ridge and Lake intersection.

But it also indicates there been no significant further reduction in crashes on Ridge so far this year.

Ridge Avenue, is roughly tied with Sheridan Road to be the longest street in the city at nearly 3.5 miles, but the heaviest traffic, and largest number of accidents, happens on the two-thirds of Ridge south of Emerson Street.

Public Works Director Dave Stoneback, in a memo to aldermen, says the number of cars on Ridge averages 15,000 to 20,000 per day.

If the city receives the grant, it would need to match the state money with $160,000 of its own funds.