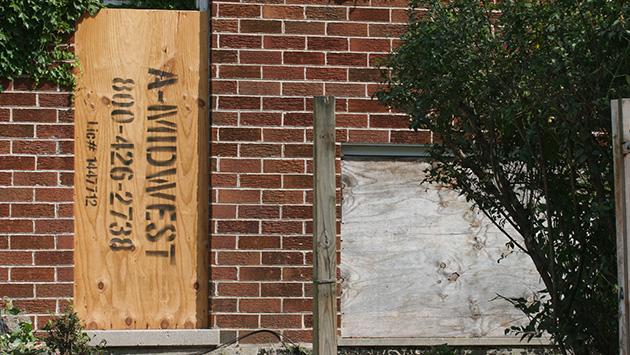 Evanston officials plan to apply for a $75,000 grant from the state to fund maintenance of vacant properties in the city.

At a 7th Ward meeting Thursday night, Assistant Health Director Carl Caneva said there are 200 registered vacant properties in the city — but just seven of them are in the 7th Ward.

A city ordinance requires owners to register a vacant property with the city and also provide a plan to address upkeep of the building.

But in a recent interview with Evanston Now, Caneva said the city may have to address maintenance issues while a property is in a limbo status, meaning the building has been vacated but the lender has not yet registered it.

In that instance, a lien is issued against the property for maintenance costs. But the city is not always able to recoup all costs incurred, Caneva said at the meeting.

In an interview following the meeting, Caneva said the state grant is funded by fees assessed at foreclosures throughout the state. About 25 percent of the total fees collected will be awarded to the City of Chicago, while another 30 percent will be doled out to Cook County suburbs, he said.

Caneva said the state would like to see the communities tie maintenance of vacant properties into larger plans for local economic and land development.

Vacant properties can cause problems in communities if left unattended, Caneva told  the dozen or so people gathered at the meeting.

Those problems include structural hazards, stagnant water that could become a breeding ground for mosquitos, garbage heaps around the property and squatting, among other issues, he said.

Some residents in attendance suggested there may be more vacant properties in the city than those that are registered with the city. Both Caneva and City Manager Wally Bobkiewicz said that, if so, the number is relatively small.

Both officials encouraged residents in attendance to contact the city via Evanston's 311 service number if they suspect a property may be vacant.