The city originally planned to spend $100,000 to repair the non-motorized boat storage facility on the beach at Dempster Street, but consultants said it would cost more to repair it than to demolish it and build a new one — about $300,000 more.

“We will make that money back within six years,” Alderman Melissa Wynne, 3rd Ward, said.

She and other supporters said the larger price is acceptable because the storage facility generates about $75,000 a year in revenue. Continued disrepair will drive away customers, Evanston parks chief Doug Gaynor said.

But six years was too long a payback time for Aldermen Lionel Jean-Baptiste, 2nd Ward, and Judy Fiske, 1st Ward, who opposed the project, citing the projected $3 million shortfall in city revenues.

“We don’t have an indefinite source of money,” Jean-Baptiste said. “You don’t take limited funds and just spend it on something because it’s a good investment when you are running out of money.”

He expressed skepticism regarding the need to completely replace the facility, calling it an “all-or-nothing” proposition, and moved to postpone voting until the city manager examined the process by which city staff reached and presented that conclusion.

But Alderman Ann Rainey, 8th Ward, moved to override the postponement and City Manager Wally Bobkiewicz offered Jean-Baptiste no help — instead, he said he had already looked at the issue, apologized on behalf of the staff and recommending that the council go ahead and approve the spending.

Fiske also pressed for postponing the vote and proposed that the city first consult the finance director to see, though savings from other capital investment projects will completely cover the additional cost of this one, if this is the best way to spend capital improvement funds.

“I urge you to exercise fiscal responsibility,” she said to the other aldermen.

But supporters maintained they were being fiscally responsible.

“I’m sort of insulted…for you to say that we are being irresponsible by voting for it,” Alderman Coleen Burrus, 9th Ward, said. “We are taking an asset which is wonderful for the city of Evanston, which is our lakefront, and we are using it in a responsible manner.”

Wynne argued the new storage facility’s greater capacity would mean even more revenue for the city. With 126 additional rental units, and a minimum price of $200 on each, the city would make at least $33,200 on top of the $75,000 if the facility achieves full capacity, she said.

But Jean-Baptiste and Fiske remained unconvinced and ultimately voted against it. They did did not find the extra support needed to carry out postponement on the decision.

“We planned to spend $100,000 to repair it,” Jean-Baptiste said. “Now suddenly there’s all kinds of justifications to spend four times that amount.” 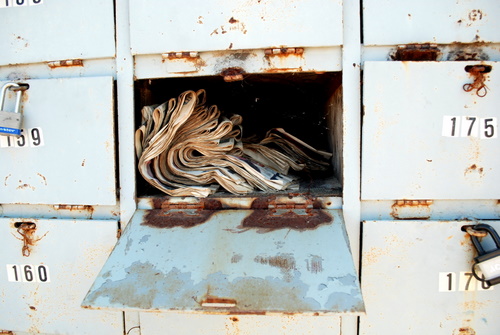 A run-down storage locker at the facility. “The only thing our lockers are good for is fox dens,” Ald. Wynne said.