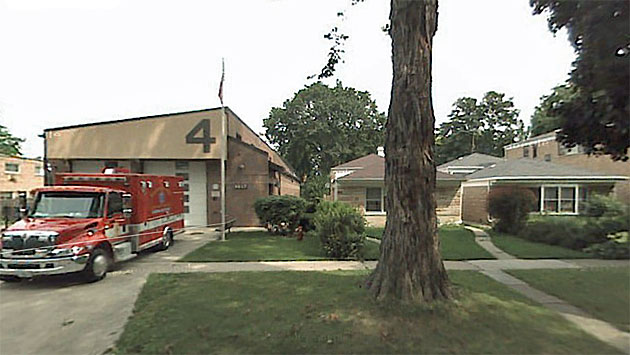 Evanston city workers will soon be asked whether they'd be more inclined to live here if the city offered some modest financial incentives to do so.

Work could be really close to home for a firefighter who bought a house next to the station — but the plan the city is considering would offer incentives for employees to live anywhere in Evanston. (Image from Google Maps.)

Evanston city workers will soon be asked whether they'd be more inclined to live here if the city offered some modest financial incentives to do so.

Aldemen Monday night approved plans by City Manager Wally Bobkiewicz to conduct the survey of all "first responders" on the city staff.

That would include not just police and firefighters, Bobkiewicz said, but also employees in the public works, parks and recreation and utilities departments who sometimes have to be called back to work after regular hours to respond to an emergency.

"When things go bump in the night, finding employees to respond who have longer and longer commutes, creates 'on call' issues," Bobkiewicz said.

The aldermen viewed the survey as the next step after they received a preliminary report from staff on "Live Near Your Work" programs in other communities.

Those communities typically offer a few thousand dollars worth of downpayment assistance or other help to employees looking for a new home in the community.

The idea arose from a council discussion last month of a complaint alleging racial profiling by police. Its backers argue that if more police officers who work in Evanston lived here, they might be better able to distinguish criminals from law-abiding residents on sight.

Alderman Ann Rainey, 8th Ward, said she wanted a survey that "in no way whitewashed the issue."

"We should include questions about why they don't want to live in Evanston," Rainey added. "If they think the schools are bad, or whatever, we need to know."

"We know costs are high here, but there may be some nuances we don't know for sure," she added.

Alderman Delores Holmes, 5th Ward, said she wouldn't want to limit the incentives to homes in certain parts of town, as some other communities with such programs have done.

It shouldn't be targeted just to "crime-ridden areas," Holmes said, "we are one city, not two."

Alderman Jane Grover, 7th Ward, said the city needed to know more about whether the incentives would actually work to bring more employees to the community.

Police Chief Richard Eddington said many factors at different stages of officers' lives may influence where they choose to live — including where their spouses work.

But Alderman Don Wilson, 4th Ward, said he had doubts about whether the program could be administered fairly and whether the city would actually get much out of it.

A study in 2009 showed that about one-third of Evanston city employees lived in Evanston, 23 percent live in Chicago, 7 percent in Skokie, with the rest spread across more than 100 different communities throughout the tri-state Chicago metro area.

Update 12:00 p.m.: Bobkiewicz says the latest figures, from this July, show that the number of Evanston city employees living in town has declined to 28.5 percent. The percentage living in Chicago and Skokie has remained about the same.

Bobkiewicz said he hoped to have the results of the employee survey available by December or January.

Plan would pay cops to live in Evanston