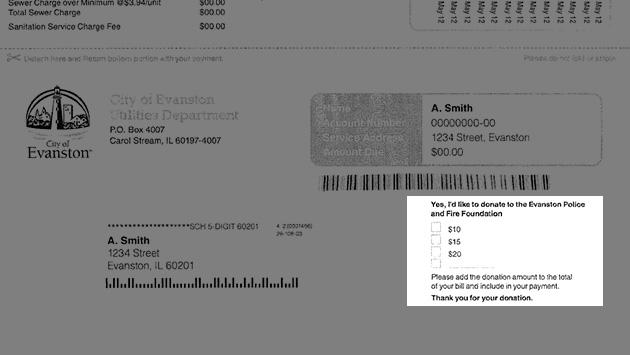 Evanston aldermen agreed Monday to hit up residents on their water bills for donations to selected city programs.

City Manager Wally Bobkiewicz suggested the donation requests might be added to three of the six bills sent to residents each year.

He said the requests might ask for money for the poice and fire foundation and the urban reforestation fund as well as other city entities — but that the city wouldn't be requesting donations to outside groups.

Although Alderman Delores Holmes, 5th Ward, said she feared residents would object to having "'one more thing' on the water bill," Alderman Ann Rainey, 8th Ward, suggested looking on the bright side. "Its the one thing on the bill you don't have to pay."

Alderman Judy Fiske, 1st Ward, was asked whether the donations would be tax deductible. She was told that they would be and that the city could probably arrange to send a receipt to donors to provide proof of their gift.

Alderman Peter Braithwaite, 2nd Ward, asked about customers who pay their water bills online and was told the system would be able to accommodate online donations as well — but that if someone had set up automatic online payments they'd have to cancel auto pay to make the donation and then restore it.

The aldermen voted unanimously in favor of the proposal and Bobkiewicz said he'd return to the committee at an upcoming meeting with a final plan and then seek approval for it at a regular City Council meeting.

He said the program could start operating as early as next March.